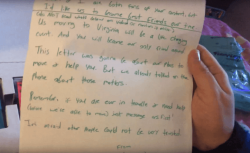 "I dunno if anybody wants to read that but, ehh."

On 7 March 2019, Chris made a 7-minute unboxing video of the Nintendo Switch he received as a gift from Sarah and Steve. Notably, at one point, Chris pulls a letter from Sarah and Steve out of the box and holds it up to the camera before setting it aside - the letter explicitly saying not to discuss the matter online, raising the suspicion of observers that this may be a sign of a trolling scheme. Chris deleted the video a few hours later, and then reuploaded it with the title A Very Cool Birthday Present!. It's unknown why he decided to reupload it, since he didn't even edit out the letter.

Hey errybody, Christine Chandler coming to you live from home once again. In my... housecoat. Wuh anyway, nuh bout that, cuz, we got a special... delivery today! [adjusts camera] This lovely bots! Wit, address on it... and... there's that side... and, big lugly bots, uhh, suspected from the certain fan. [rotates box] Side. [rotates box] Huh. Side, side. As if we didn't know what was coming. Cuz, it came! The box came a bit damaged, so, [moves camera to box] you pretty much SEEEE what we're esspeh-what we're... getting, this little bit. So let's open this thing the rest of the way. [starts to set camera on bed, then notices Sylvia looking at the box] Oh look! [picks camera back up] [in baby talk voice] There's Sylvia! Hi sweetie! [Sylvia walks to the edge of the bed.] Oop! Ha ha, wuh ya doing? Youse camera shy? What are you camera shy? You're so silly. [higher pitched voice] Why are you so silly? Silly Sylvia, I love youuu! I do! [sets camera down on bed]

Let me get my pocket knife, [Chris opens the velcro case of his pocket knife off camera] do something here. [Chris picks up the camera, and shows Sylvia pawing at the case.] There you go, she's playing with my pocket knives... thing. Kitty kitty! This became a cat video! [nervous sounding chuckle] Livia you're so silly. [moves camera back to box] Alright so, I'unno I guess I'll just, pick it at and... open it on that side. Gonna go with this side. [moves pocket knife to box] [Sylvia moves to the box, and stares at the damaged part] [in baby talk voice] Onoppa[??] kitty! This kitty. [Chris starts cutting open one side of the box] Da-dang she got spooked by... [Chris finishes cutting one side of tape] the knife noise. It's noisy! [Chris grabs the box] Up! Aight! [Chris turns the box upside down] Ehnna[?] this way! [Chris fiddles some more, then begins cutting the other side.] Okay. [Chris realizes he's turned the box to where it's supposed to be opened] Oop! Duh. [Chris continues cutting] There. Ooh! [Chris puts on a creepy gollum voice] DASH PRESUSH! [finishes cutting the box open] [sighs] Maybe do a this side-this side up type arrow thing when [Chris starts opening the bots] opaging[?] it? These? But, it's good! It's good!

Aight. [Chris finishes opening all the flaps of the box and moves the camera towards it] Yup. So, [Chris pulls out a small box] there's a small thing. [Chris starts opening the small thing] What's that? [Chris opens the small thing, which has a small painted coin purse along with a note that says "An extra surprise gift from us! From Steve and Sarah"] Aww! It's a little splays cue[???]! Aww that's cute. That's cute, look at that, thas pretty. Ess a little, huh that's a cheese purse. [Chris takes out the... cheese purse?] It's a... pretty little... cheese purse. I like that. [Chris sets down the purse] Anyway yup. [Chris pulls out a note on top of the box of the switch] Here it is, a Nintendo Switch. Yay! [Chris takes the Switch out] Uhh. Get out the bots. Oh. [Chris moves the camera to a corner of the Switch box that says it comes with 35 dollars in E-shop credit.] Hey look a that. Includes, 35 dollars on the E-shop. So groovy, I can get started! [turns the box on a side and starts opening it] And, let's, open this up so, we can confirm it's [in a mocking voice] not just an empty bots! Where dey sink of the audience at home when dey do it the pocket knife. [Chris takes out his multi tool] Where dey do wid this... multi-purpose... pocket knife. [Chris spends fifteen seconds fiddling with the multi-tool while grunting] Eh. There we are hm. [Chris flips the multi-tool around in his hand] If you can't tell it's also a... pair of pliers and a wrench. [Chris starts cutting open the sticker seal on the Switch box] Enf. This dee[?]. [Chris opens the box in a clumsy manner]] Yay! Nintendo Switch! Yayy! So, merry Christmas present. Merry Christmas present, Doo boing! Doo doo! It's a thing! [Chris sets the camera down on the bed, covering the lens] Ding! It's in there! [sounds of paper rustling] [Chris picks up the camera, and is holding a letter by Sarah and Steve] And... nice little letter I dunno if aybody wants to read that but, ehh. Iss safe to read but, oh well it doesn't have their address on it so, you can pause n' read that whatever. Uhh, fortune I was kinda like, half expecting to get a Switch in the future, cuz, in case you haven't seen on my trophy list I had...[holds up Switch copy of Starlink] gun Starlink on PS4 an' I also got the Switch version, so, [shows off Starlink controller mount with Star fox figure attached.] add this! The lil Fox Mcloud! [holds up Starlink Arwing figure] An' the Arwing! Zoom! [Chris attaches Arwing to controller mount] So, kinda like half expecting. [sets down camera and reaches into Switch box] O hey. [Chris pulls out the Joycons and holds them up to the camera] Joycon things, So... Owamly. [transcriber can't figure out what the fuck Chris is saying here.] Hm. [Chris puts joy cons in controller mount, and shows it to the camera] So yeah, hm! I can finally mess around! Dededededededededede! Imfin [?]. [notices Sylvia again, and speaks in baby talk] Dis kitty! Dish kitty! Is Sylvia! Hi cutie! [Chris stops baby talk and holds up a copy of Super Smash Bros Ultimate] Eh, I also went ahead and bought this, couple days ago. [sets game down] So, yeah, with that I'll end up... [shows off Sonichu and Rosechu Amiibo] placing these on, dere. Hey! Nintendo! How about, [Chris moves closer to the mic] DLCing us in, Sonichu, Rosey, and... me, Chris Chan, Sonichu. Yup.

[notices Sylvia again, and speaks in baby talk again] Look at dis silly kitty it's [unintelligable]. Still a kitty! [Sylvia starts pawing at the empty box] [voice gets even higher] Why are you so silly?! [Chris stops high pitched baby talk] Oop! I think she likes the empty bots. [Chris turns the big lugly bots on its side, so Sylvia can walk into the open side] Uh go an eet deet bots?[1] There you go. [Sylvia crawls in the bots] Yeeah. There you go now its become a... cat in the bots video. [Chris drags the bots so Sylvia faces the camera] [high pitched voice] Yup! Helloo! Look at the cat in the bots! [creepy chuckle] Become a cat in the bots video! Yuh. [Chris reaches out to pet her] Aw, you're so silly. [Sylvia jerks her head away and struggles for several seconds before Chris finally pets her] You're so cute. [Chris nuzzles the side of her head, Sylvia looks uncomfortable] Love you! [high pitched voice] Love youuu! Yes I dooo! [Chris jangles Sylvia's tag on her collar] Eh well, and I had to buy her a new tag and collar recently, because she [Chris rubs Sylvia's head] looost her previous co-her original collar. Hey! [Chris stops rubbing and shakes the jingle on her collar] Got a jingle bell back [Chris fondles Sylvia with his fingers] so now I can hear her coming! Naaww. So cute. [Chris stops fondling Sylvia and moves the bots] [Sylvia runs out of the bots] She's so cute! Oop! And then she hopped out cuz I moved the bots, I'm sorry. [Chris moves the bots closer to Sylvia] Why'nt you get back in? You can get back in! [Chris puts plastic packaging material bag in the bots] Here. Why'nt you get back in? Think you look cute. You cute. Eh heh. [Sylvia goes in the bots] There you go! Hm! You know, she, just being a kitty. She's being herself. Heshew[??]! Hey dere! Hey cue. [Chris nuzzles the side of Sylvia's head with his finger] Goo-goo-goo-goo-goo-goo-goo-goo-goo-goo! Aight. [Chris moves the camera back at himself and switches back to normal voice] Okay, so there you go. Unbotsing. I'm gonna mess around with this, and update and all that, so... [Chris gives a creepy stare and smile for several seconds] Y'all saw that. Okay! Thank you very much and... have a good day.