Exposed - Jeremy Slonwhite of Vancouver, BC Canada is a video Chris uploaded on 12 August 2011. Chris uses this video to expose information about Thorg and to show that he is very serious in releasing his information. Instead, the video confirmed that Chris had no real leverage against his trolls, as anyone with cursory knowledge of the internet recognized that the supposed picture of Thorg was really the template image for the Butthurt Dweller meme. This is not the first time Chris thought one of his tormentors was the source of an image macro template. It was quickly removed as hate speech. The new Pedo-glasses make their first appearance on video. 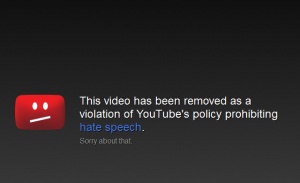 The one catch to Chris's brilliant scheme.

Another fine day, another good day. [pause] I understand that, uh, Master Thorg, also known as Jeremy, is, uh, very atheist against me and my ways. So, to prove to h- so to prove to him and to everyone that I am serious, very serious, about revealing troll information…

He will be on the chopping block right now. [Makes a karate chop hand movement and a sound effect that sounds like a crushed tissue.]

[Jerks the camera around wildly to face the TV screen.]

This is his…trolling persona pho-to-graph. And of course, here's da full photograph, [Scrolls down to show picture] of which I have shown previously in full- der- in full-- persona. Troll alias: Thorg. Real name: Jeremy Sloanwhite. Lives in- resides in Vancouver, BC, Canna-duh. Occupation: Aga- employee over at- at Gamestop over there. Age: 32. He is a sin- he is a single virgin. His interests include Dungeons & Dragons, Stargate, World of Warcraft, Star Wars, Star Trek, The Elder Scrolls, Mountain Dew, Magic: The Gathering, GURPS, whatever the hell they are, Minecraft, Gaia Online, LARPing, live action role-play, and trolling.

He is- he was responsible for leaking the Tomboys And Tomgirls of Virginia to the public through the CWCki, Pho'oshopping me into a gay bar, which Clyde Cash uploaded to a billboard in New York City, New York. He has participated in the Trollin' Train, he contributed bad things into my mailbag on the CWCipedia, and general YouTube, CWCki, trolling, and support roles.

And following that, we have two more photographs of Master Jeremy Sloanwhite. [TV screen changes to show almost-completely white photo due to terrible webcam. The photo slowly dims to reveal another "Butthurt Dweller" photo.] What an ugly sunnuvabitch! Really ugly! Eeehh. He looks like he's got a penguin in the background of this photograph.

[Photo changes again to another photo, holding a piece of paper that reads "CWC is a fat retard tranny -Thorg 10/8/2011"] And then there's a more recent one, where he da-erhs- plays atheist against me!

[Chris' voice raises.] EVERYBODY! PLEASE FEEL FREE TO TROLL MR. JEREMY SLOANWHITE, AGE TWE-- AGE THIRTY TWO, IN VANCOUVER, BC, CANNA-DUH, AT THE GAMESTOP AT WHICH HE WORKS AT!

[Jerks the camera back to himself] An' then right after that, you will s- everybody can stay tuned for next trolling-- next troll I will be revealing a little bit of info of. In which, uh, now if you'll excuse me, [stares off-screen] I'm gonna go [sudden high-pitched voice, attempting to imitate Ke$ha] brush my teeth with a bottle a' Jack!