Calling Out Jack Thaddius - Ahuviya is a video uploaded by Chris on 16 August 2011 and part of the Calling Out series. In it, Chris, lipstick and all, threatens Jack Thaddeus. Unlike his reveal on Thorg, Chris becomes two-faced as he accepts Jack's desire to be a transvestite and seek gender reassignment surgery, yet he attacks Jack because he chases after guys. Like the reveal on Thorg, Chris wants to see him trolled not so much out of a tit-for-tat desire for revenge, but rather because Chris found out he was homosexual. Interestingly, Chris gives Jack ten extra days to come up with his apology video and to leave the Internet. 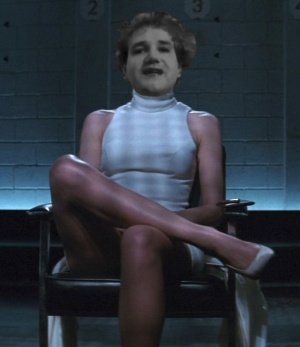 The one time you wish he was wearing DIRTY, CRAPPED BRIEFS.

[Chris sits down and sighs.] Good day. I felt that it's appropriate to dress in my feminine attire as I- as you can see fits. [He stretches out one leg, trying to show off his ass.] Because I am definite calling out one Jack Thaddeusss, and we happen to share [He lifts his leg and rests it on his knee, giving the camera a buffalo shot.] some similar common interests, a few of which. Like, uh, yes, we can- we- we do accept the adj- we both accept the adjective of being called trannies, esscept for him, he's, uhh, he's just went through a whole- the whole gender-changing operation. Yep. Lopping off his dick and puttin' on the ol'... an' gettin' it tucked in. I am not- I would never chop- I would never do that to- I would never do that. Go and have a sex change operation. I'm proud to be a male, and I'm even more proud to be a tomgirl. 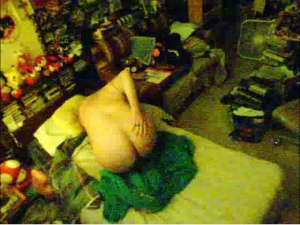 Except for, uh, I would definitely s- put against, uh, Misher Jack, or, as is real name is said in de title of this video, which I will say in a moment. Uhh, in the pro- in the- in his- in his case of him, uh, having his operation and going through it, I feel that he would defi'itely not be considered any at all a woman- a woman whatsoever. He just only fashionably [raises his hands] looks like a woman, with the parts and whatnot, except he does not have- essept he would not have a uterus, and he would have no repoductive[sic] organs. I mean, I want to have children someday. Obviously, he don't. [Gives a disgusted look]

And, uh, also my associate dat gave me the information on him, he- pretty much, uh, he pretty much is plain out callin' him a tomgirl, but you know what? He's not a tomgirl at all. He's just a full-blown gay. [Stares into space, then looks down at his clipboard]

Anyway, gettin' back on topic, uh, his name is, uh, Ahu-viya, which, uh, it is spelled at the title of this video. Hmm, he is in Pennsylvania, and, uh, I have pretty much just gave a few descriptions of him, uh, yeah. He definitely appreciates his... homoseshual culture as it is. I mean, yeah. Everybody- everybody who hates- everybody who is a ho- who is a homophobe, [drops his leg down and sits upright] go ahead and call him on it. Call Ahuviya a God-dang homo.

[moans with a derp voice, imitating Ahuviya] Homo! I like to be a homo! He-he durr-hurr bluh bleh bleh! Eeeeoooouh! [shakes his head with his tongue sticking out, then blows a raspberry]

Yeah. But, of course, the, uh- my demands are simple, as they ha' been recently. I want Mr Ha- Ahuviya to make the public apologies for all the things he have done a- he has done against me. [Quieter voice.] Shoot, I forgot to write 'em down. But he knows what he did! Among which, uh, he has, uh, pestured me, and, uh, on the phone, and uh, blackmailed me into doin' a few things. Yeah, I'll in from th- get those stats in and, uh, if he doesn't, uh, I might add them to the description of this video, after I wri- after I write 'em down.

Hmph. Anyway, 25-year-old Ahuviya, homooooo! Pretty much it. [Swings his leg back up to rest on his knee] We do agree on being cross-dressersss. Although, I must also admit, um, [to himself]I should have access to that actually, uh, yeah. [Grabs his PS3 controller] Just give me oooone moment. [Boots up his PS3] Yeah, I think this is it. Whoops. [puts controller in both hands] I think actually did... save it on here... Huhhh, zoom in, I only want a but of a free sample.

[Grabs his camera shakily.] For thisss, as usuaw... hmm, I gotta get a little clossse here, because I don't have zoom-in functions on the Cross-Video bar Photo Viewer...

[Cue a bright yellow light] Closer the picture. [Shows a close-up of a man's chin.] Yeah. Anyway, he just does a bad- he just does a terrible job in cross- quote-unquote "cross-dressing," because I mean, look at that stubble on his face! [Smacks his hand on the camera lens.]

[Uncovers to show his arm, then the camera pans over his messy room.] And then look at me all over. I take the time to shave myself. [Close-up of his bare thigh, then slaps it.] Smooth. [slaps his ass]

[He jerks up the camera back to his face.] So yeah. Ahuviya... make your apology video, leave the Internet, leave me and my family and my friends at peace. You have... uhh, lemme see... [He checks his calendar, counting under his breath.] One, two three... Yeah. You have until the tenth of September of this year to upload your video of apology for all the wrongs you have done to me which I list in the description a li'l later. Good day.