Response to ADF is a video leaked by CWCki user Dinglebear, under the alias CWCvilleProductions, on 29 August 2011, and part of the Calling Out series. In this video, Chris responds to Ahuviya after he uploaded two videos in response to Chris calling him out.

Chris provides yet another halfhearted explanation on why he doesn't like the homos, but has no problem with lesbians (read: they give him a boner) and gives his approval for gay marriage (he would later on reverse his position). He claims to have empathy and believes that he can't get a job because of all the "slanderous smut and shit" on him that shows up all over the internet, and can't move out because of his parents' age and physical disabilities. This is one of the few moments where Chris seems to be conscious of the real-life implications of his online activity, but in typical fashion, he pins fault on those slanderous trolls. 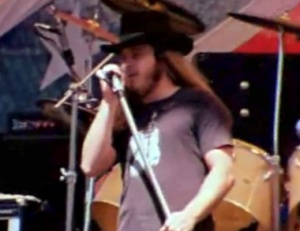 If I whined like a virgin, would you please have sex with me?

This is my video response to... Ahuviya, who has apparently taken upon himself to, uh... record his response without blurring his face, optionally or leaving it out. So I'm just going to respond directly with my, uh- a few of my own thoughts. First off, I uh- now... I am heterosexual, I am straight, and that's just the way I am! It's not a have-to situation, I've never seen it ev- rarely seen it that way, I have at one point, but guess what, I've seen the other viewpoints, and they did not treat de ne- did not fair to me as s- so much, they gross me- they mostly gross me out. Therefore... that is what I am, and I am happy to stay that way, and I want to continue to be heteroseshual. I am happy with myself there.

And I would admit that with other people, there are differences that I feel most uncomfortable about and around, such as... yes, gays... gay men anyway. [disgusted look; blows a raspberry] I like lesbians. Smokers, definitely the smokers. Can anybody tell me why smoking isn't stupid? I don't think so. And just most other males in gender- in general, because I get along better with women anyway. That's not really my fault, that's just part of my dang brain function with the missing links in my... brain and whatever. But that does not define me as an uncaring and cold-hearted person! I have empathy! I seek- I can see myself in other people's shoes and see how they would feel if I has- if I- with my responses into whatever situations.

And yet you may- while you may or may not have empathy as well, Ahuviya, I feel you to still be a typical non-understanding pig! I would go- I would travel outside of the state if where- or wherever if I could but, because A: I have- I'm on low funds, and I would get a job... but unfortunately, because of all the shit that's against me on the Internet... between the hate-filled webpages that y'all trolls and cyberbullies have created against me, and the past videos that I was blackmailed and deceived and just plain forced into creating, with such derogatory graphic smut and literal shit within them, it just makes it that much more difficult for me to be able to get a job. 'Cuz they do the background checks, look up Facebooks and look on YouTube and look everywhere! They don't just do criminal records anymore, ask anybody!

And I would travel if I could, but my parents are both old. My father is ill. He's sickly. He has feet-bloatings. And he has ailments that doctors are unable to determine, and at this point he is certified as a forced shut-in! He cannot get out so much, 'cuz he feels so ill and sickly in his feet. And I do get out of my house, I go out here and there and everywhere, so don't tell me that I don't get out! "I'm free as a bird and this bird... peep- and this bird you cannot change!" Yes, I learned from Leonard Skynerd, and I like that song.

And listen- and I want you to listen here. I'm all for equality, but there is a limit! [Chris hits the camera] I do not want to be forced or intimidated into or bullied into lifestyles that I just not am of, or feel comfortable around! And this was a country where... people would not feel forced to do anything... then, whatever! And yes, marriage should be between two happy people, regardless of, uh, gender or whatever. But I'm still gonna feel most uncomfortable around homosexual dudes, regardless! And just most other males in general, hell, I probably won't even have a bachelor party 'cuz I don't know so many males, I'd probably be having a bachelor party mostly constituted with those within my congregation who I'm only acquainted with, like, one or two of. Hell, I would even appreciate having a bachelor party where I had all my gal-pals come and hold it for me! I'd rather have a bachelor party with... where it was... shoot, I'm trying the think of the word, um... well anyway, with m- anyway, with mostly women, 'cuz I feel more comfortable ar- around women. Platonic, that's the word I would use, the party would be platonic.

And likewise, if my bride had mostly male friends, I'd let her hang out with them platonically as well for her bride party. And you know what, I don't care whether I get a bachelor party or not, around the time I do get married. Because that's just- that's just me. And I cannot be changed. So I would- so I would say, good luck being a fake woman because you'll never be able to achieve true femdom! And you'll always be a dang homosexual male, 'cuz you're born that way, you gonna to stay that way pretty much even if you're gonna- if you're gonna have your dick either chopped off or tucked in! People are still gonna look at you so ill. In the majority of this country.

Anyway, that's my response for now.