Calling Out "Tito" - Don is a video uploaded by Chris on 6 August 2011. It is the first video of Chris's Calling Out series, and his first video since 100_2357.MOV from November 2010. In this video, also known as 101 2461, Chris announces his return to the Internet. He claims to have information regarding the true identity of various trolls, including Surfshack Tito (aka "Don"). After briefly showing viewers a fragment of a photograph of what he claims is the real Tito, Chris lists his demands to prevent the release of the full photo and, presumably, other revealing documents, and says The Wallflower's real name. 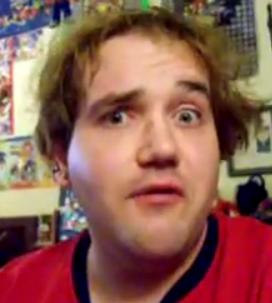 "... They could be easily trolled back by aaanyone." Intimidated?

[Looks at camera with an emotionless face, and then jerks the camera to his right]

Attention, citizens of the internet. I am making a return. Y'all should know me by now, if in case if you don't, I am Christian Weston Chandler, the original creator of Sonichu and Rosechu and the electric hedgehog Pokemon. Firstly, upon that note, I would like to inform everyone that it was originally meant to be a TV-Y7 rated... friendship socializing, promoting type of series... it is not meant to be taken otherwise in any adulterous forms.

And with that, I will now continue with why I am making my return. I am ready to initiate negotiations and paybacksss with the trolls, some cyberbullies that have been defiling me within the past five years... in the past four years. Firstly, I would like to make it well known that I have information of such trolls and cyberbullies if at that point if I release them, they could be easily trolled back by aaanyone. And, the first among chopping block I would like to ensue, Surfshack Tito... or should I day, Don in Michigan! And I'm not saying that he's a total fat person, but he would make the really big Buddha look like a supermodel in comparison. In fact, with his looks, he could be a Rasta Buddha! And I show you only a fragment of the pho-to-graph. [Turns camera towards his television, showing part of a man's face--or a tilted shot of a man wearing a bow tie. We're not sure.]

Now, DON. Let's talk business. If you do not want me to review- reveal the entire pho-to-graph, or any of the remainder of your information of which I have upon my possession, YOU WILL FOLLOW MY DEMANDS! And they are listed as such...

I want you to come forward with- come forward with your participation in, uh, PlayStation Network hackings... directly to Sony Computer Entertainment America and Sony Computer Entertainment Japan with a live video, unaltered, ay, uh--slightly altered, you MAY blur your face. That is the only option that you get: Blurring your face. You will apologize to... Sony and myself for hacking into the PlayStation Network at all, 'cause I know you are responsible for that.

And also, I would you to, in that- within that same video, or in a separate video, apologize directly to my ex-girlfriend [The Wallflower] and her family. You may even call them up on the telephone that you are the one among which responsibole for pretending to be me... and stopping that relationship between us, 'cause I would like to have peace between my... past friends, because I don't like there to be bad things or ill tidings between people. (Pauses) And I know it was partially my fault, too, on that, by the way, within that relationship breakup.

But anyway, moving on with my demands, I would like- also like you to set to-send me via U.S. Mail, ONE THOUSAND DOLLARS CASH. American. Unmarked billssss, snail-mailed to my home address, in a long, small white... envelope, with YOUR home address clearly, legibly, hand writ-ten on the envelope in the return area. Next, I want you to remove ALL of the -cre-ALL of the pages on the website known as the CWCki that have originally came from you that you have started. Also, as well as all contributions you have to any other pages as well. And lastly, from this point, after you have done these things, I would like you, Don of Michigan, to leave me, my life, my family, my friends alone. To be, for the rest of our lives, in peace.

I leave that up to you Surussshack Tito. Expect another video in the near fu- in the near future of another troll that I am well aware of. Thank you.

In a clear attempt to meet Chris's demands, Tito produced a video in which he explains what lengths he is prepared to go to in order to prevent Chris from releasing his personal information. This video was acknowledged by Chris the following day.

It is worth noting that the person in the video is not actually Tito in real life, but in fact a guy known on YouTube as "MrPregnant"; the footage of Tito's stomach is a zoomed-in mirror of his "Big Belly Man" video, with Tito's voice dubbed in.[1].

(grabs stomach and jiggles it) Heh-heeeeeey, little cuz! Uh...or, uh...Christian Weston Chandler (lets go) if you prefer. It's uh...it's me, uh, Tito! Or, uh, or Don, um...listen, man, I-I got some sand in the potato salad this time; you caught me, cuz. I-(points at the camera and slims down his belly) I admit it. I sold the security files of Sony to the hackers and...and I'll, uh (does a little dance) I'll get you the money! I'll get you the thousand dollars, and the interest! (grabs his belly for dear life) Just don't- just don't release that video, eh, with--with the picture of me, just don't do anymore, man! I'll, uh, I'll do anything, I'll be your slave for a whole week if I have to, I...(dances again) I got people after me, I can't have them finding out who I am, just, just be a cuz, man, and-and-and- and don't let me down! I won't let you down.