Re: Don, and ReCalling Out "Thorg" - Jeremy

Re: Don, and ReCalling Out "Thorg" - Jeremy is a video uploaded by Chris on 10 August 2011. In this video, also known as 101 2466, Chris accepts Tito's attempt to meet his demands, while Thorg appears to have made no such efforts yet. Chris is still awaiting the money he demanded (apparently forgetting that in the last video he admitted that blackmail was a felony), and another part of Jeremy's face and part of another photo Chris has obtained of him are shown to viewers.

This video also shows us that Chris now has two piercings on each ear. It was previously believed he had two on his right ear and only one on his left. 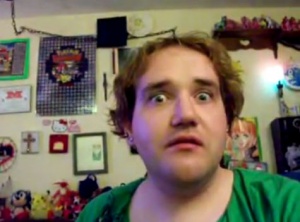 but miss the deadline... 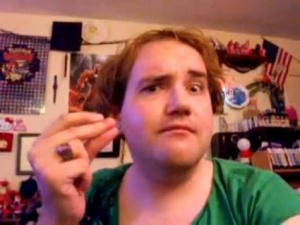 Y'all best remember to check your privileges, ya hear?

Well, it seems I have gotten a well-wise response to my recent videos...from master Don, of which I will now respond to as sutss. You d-you made a wise decision, Don. I am-as long as I get the money before the end of the month, I will withhold the photographs and the other information. I can promise you that, but miss the deadline... [widens his eyes and stares into the camera] and you certainly don't have to be my slave for a week. I mean, aside from the slave laws and everything. [shakes head and sighs]

Anyway, apparently I have learned from my esteemed colleague that Thorg, master Jeremy, is still not convinced I mean businesss. Well, just to show you, Jeremy, that I mean businesss, I'm going to reveal a little bit more about you.

Here is a closeup-another closeup of that pho-to-graph zoomed in on your pizza face! [looks off-camera at the picture and zooms in on a different part] Excuse me a moment. [whispers] alright, [mumbles, as air conditioner gets louder] as well as a zoom-in on a possibly more current, or possibly previous pho-to-graph of yourself. Aaand, I'm gonna reveal a couple of random tidbits about you from my notes!

Once again, Jeremy lives in Can-a-da...and he likes the typical geeky things, without being stereotypical, of course, and not offending anyone of the sort, because I am considerably one myself, because I like Pokemon, Yu-Gi-Oh!, and all- and that sort. Apparently, uh, he is a LARPer. Live action role playing! As it was portrayed in that episode of The Tester!

[begins to speak in a high-pitched, singsongy voice]

"Oh, look at me, I'm trollicking about! We are going to be warriors and whatnot! Yay, we won the things! And then we're future cops, sent being- mall-for future mall cops! Mall cops of the future! La, la la, la la, la la! We're LARPing about! LARP LARP LARP LARP! LARP. LAAAARP. LARP! Lorp."

And we know that the atheist does not like having his mind changed about God. I mean, I gotta tell you, man, God is all-powerful. How do you think the Earss was created aside from the big bang? Who had to put the big bang together? God! And I know from my bible [shows bible], my hand on it, that between him and Jesus, they're pretty powerful! They're pretty powerful individuals... and I believe in them. They have- I mean, Jesus has done a lot with his miracles before he had to weigh the cross, which I just empathize with him on that, I mean.

[Closes eyes and inhales through teeth] It's like I can feel the thorns that were drug-that were drudge, plowed through his hands and his feet! Thorn of crowns. Mm. Empathy is a powerful thing.

But...I would certainly not want to be an atheist, 'cause if I don't have God or Jesus at my-by my side, I would be more lost than I was considerably beforehand! Atheists...are the Devil's spawning, as it would seem! ...And I would certainly would not want to be amrong- amongst them when they are run out of town with the pitchforks and the hace and the fire! As a believer...I would either be a peacem- I would more likely be a peacemaker, but I certainly wouldn't mind being one with the pitchfork, following the crowd and pushing the atheist out of town!

You have until August 31st to reply and follow my demands of admitting...your wrongdoings, and making the public apologies via YouTube video, as I am a-well aware, as I have made note, but apparently the billboard is no longer an option. Anyway, between the YouTube public apology, and leaving the internet for good, AND leaving me, my family, my friends at peace, that is what I demand of you, master Jeremy. [air conditioner gets louder]

Your move. 'Cause if you're not, fulfill- if you don't don't respond by the 31st, [snaps fingers and widens his eyes] I mean business. Check your privileges!