In "Captain's Log, Stardate December 20th, 2009" (officially "12202009.MOV"), Chris torments one of his many cats (Kitty Chandler) and discusses how he could not upload any comic pages due to his shitty computer not working after a blackout. He also tells his viewers not to look at any billboards in New York City that involve him, claiming that Clyde Cash had photoshopped the pictures. Despite this, in Calling Out "Thorg" - Jeremy, Chris outed Thorg as being responsible.

Note that only one of the pictures was photoshopped, which depicts Chris at a gay bar.

Oop... [Chris speaks in baby voice] My little Kitty here is getting a little fussy.

[Chris puts cat down after it harshly hisses, and the cat immediately stops growling]

[now acknowledging the viewers] You know how kitties can be sometimes. Anyway, um, making this video as an update. I apologize for past couple of nights of me not being able to upload any pages, because, uh, yesterday I had a two-second blackout which pretty much, uh, took my computer out and, uh, what not, I'm trying to restart it, it messed it u—it wouldn't work for me, so I had to go through a whole restoring-the system restore thing, and it just took me a whole... great number... ti—great amount of time for me to fix that and reinstall al-most everything, but, yeah—but, a—as soon as—as soon as this bad time this video is uploaded, I'll be able to, uh, answer a few more letters in the mailbag, and I will. Kitty...

[In a moment of classic autism, Chris forgets what he was talking about mere seconds ago and goes looking for the cat off-screen]

[Chris grabs the cat off-screen, and the furious cat's screeching is heard, followed by Chris speaking to it]

[Chris puts the cat down, then continues to speak to the cat for no apparent reason]

[speaking to the viewers again] Eh, anyway—uh, anyway—so anyway, I have—anyway, I have the pages up tomorrow, which should be a total six pages, so look forward to that, and, also, uhh, recent uh, piece has come to my attention, yeah. Currently, do not believe anything you see on the billboards, 'cause, apparently, uh, Clyde Cash has, uh, been dis—been trying to shank my reputation there with his... thing and, uh, yeah, anyway, but you can tell obviously that that pi—that that picture he currently has there is photoshopped. Any picture he has of me is Photoshopped; it's fake; you can tell it's fake. So, again, uhhh, basically he's pu—making, he's just putting things right up in New York, but, anyway, just do not pay attention to those... okay? Anyway, with that, uh, I'll leave you all to that, and I'll answer some more mailbag laters tonight. Merry Christmas.

One of these things is not like the others

Here are the pictures Clyde Cash uploaded on the Times Square's interactive billboard. Note that only one is actually photoshopped. 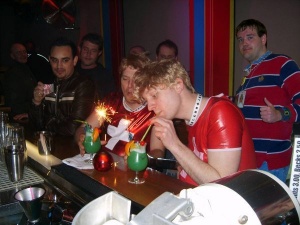