Asperchu is a Horrendous Joke 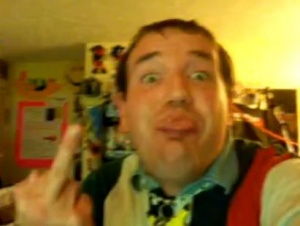 His review is, shockingly, unfavorable, and he spends nearly ten minutes complaining about various things, most of which Chris does in his own comic. He then threatens Mao, Alec, and Evan (but for some reason, not Sean) with the terrible might of his pastor (who disapproved of Vivian's book) and the FBI. One of Chris's major points in his argument is that he was set on fire in the comic, and calls it "horrendous"; apparently, shooting somebody in the legs is perfectly fine, though. Also of note is that despite Chris saying that he hates Asperchu, he still took the time to download each page of it onto his PS3's hard drive.

Chris also heavily implies that his dead dog is now some kind of evil spirit with the power to kill.

This video also defines what Chris considers to be "homosexually oriented". In addition to casting his male characters as homosexuals (though Sonichu is straight) and putting pictures of nude male models in the background of some pages, Chris feels that his sexuality is questioned by characters using the word "fag" and Jivin engaging in heterosexual intercourse (though Jivin's partner was very ugly and Chris may have confused her for a guy). 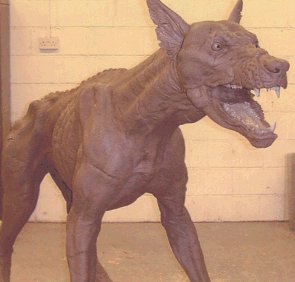 Patti will have your soul for dinner tonight.

I am here at this point recording this video to make it perfectly clear. Although it was a bit of a mistake with that last video I made, but you know what? Regardless of that video, I did- I shouldn't have not have had to make such a video, because I can prove- I can just show ya'll the evidence, [Chris grabs his camera and starts walking towards his TV.] that I have just read through the entire bunch of pages...of hi- of Alec's...Asperchu. Unedited, all fresh from the website, organized by page number. In my playlist.

[The camera shoots downwards, a list passes by it momentarily, before Chris's TV comes into focus. There appear to be an array of comic pages on screen, set against a continually changing South Park "Dynamic Theme" background.]

First off, just to name a few things, there's an o- there are the obvious...sturdy slanders! [The cover of Asperchu #0 comes into focus on the TV.] And obvious references to with I mean the old Buddha belly that I used to have, exaggerated manboobs, and even the goatee I used to ha- I had one time. And he makes him- and he makes...his Asperchu character wear nearly every shirt I wear. Nearly every shirt! And a crappy copy of a medal! My shirts.

[The cover disappears, and Chris scrolls through the list of comics, finally picking a page in which a man is talking to a dog that really doesn't look anything like Patti Chandler.]

And then to make matters worse, he goes and be—sssmirches my old- my dog! By making a crap- by making a crappy flop- a crappy copy of my dog! My d- Patti will- Patti's- the spirit of Patti will have his soul for dinner tonight! She will be haunting your nightmares, Mr. Leary.

[Screen goes back to page selection, picking a page that has a picture of Asperchu's Take on Ian Brandon Anderson.]

And of course, even including the unapproved recreation of my charact- of my person within his pages, as you can see right here. You can find all these on his Asperpedia. 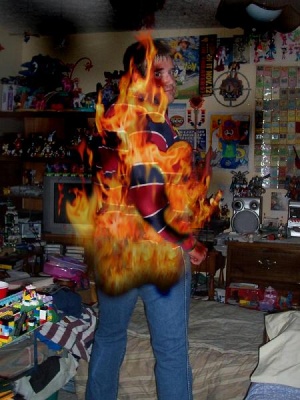 He sets me on fire!

[Back to page select.]

But I could get- I could definitely reference a few more instances of where he actually is considering peeing on himself within his own comic series. Starting with, of course, with a few from his first book of graphic nudity or sexual reference on page three of his 0 book. Even worse off, on page 10, and while he's in that Burger King! With all his goddamn homosexual references as well!

[Chris shuffles through a variety of pages featuring the Asperchu date plot in book one. None of them contain any homosexual references. He then returns to the page select.]

And he uses uncensored swear words, such as [Camera swings back to Chris] shee-it and ass! In between all- in between all of his books! So many goddamn of those. And his- and his A and B books are anti-religious! Anti-religious! In those two books. That little son of a bitch, he's pee- he's basically peeing on h-his own self.

Now look, I'll admit I have done my little share of nudity within the comi- within my- few page- within a couple of pages, but they were censored by either images of lemon for vagina an' bananas for...dick. 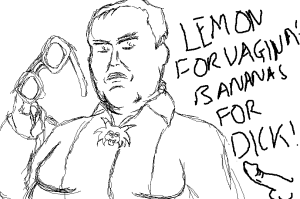 LEMON FOR VAGINA!!! BANANA FOR DICK!!!

[Chris makes a revolted face at having just said the word "dick", then scratches the back of his head.]

And it was f- and da- and da- and that book was finally finalized and organized so that it be 'propate for all- for all those of ages, TV-Y7...and such. And I- and if I ever said a swear word within my book, I would censor it, [voice cracks] but he does not censor his own swear words.

But like I said, [Chris reaches down for his script.] he's basically gone to the things aga- he's basically mocking me with the references of myself. Between my- between the bu- between the belly, the manboobs, the goatee and glasses, numerous shirts, a fake medal, wearing- h'yeah. A c- a-copy of MY DOG, an unapproved recreation of myself and my Son- and my characters, and even SETS ME ON FIRE [Chris starts wandering around the room, keeping the camera on his face] and makes my- and makes what is- makes his ver- and makes HIS quote-unquote "Sonichu clone" go against me as being- as not being the original creator of the original Sonichu. Now, s- the original Sonichu of that thing can be caught in the wild, so therefore afar- as far as I'm concerned, that's just ano- that's just another one he caught from the wild, and drew hisself a clone basically. Just another individual, aside from- aside from the original Sonichu that only lives in CWCville.

And also, in reference to the un-not 'proved use within book number 0 on pages 19 through 24, including- including- the homosexual references, he supposedly thinks there's a- that- he supposedly thinks that there's this law change in CWCville and it is wrong for him to quote CWCville at all within his book. And no such changes, as he has said, has happened within CWCville. [Stops and grabs camera vigorously with both hands and looks directly into it] He wishes he knows my Sonichu, Rosechu, and all my electric hedgehogs as well as I do, but he can not, because he is not me, the original creator. [Resumes wandering around the room] HE IS NOT ME.

So uh I am send this message again to Alec, Evan, and even Mao- I have less offense with Sean by the way, but to those three...

[Chris flips off the camera and gives a two-and-a-half-second raspberry.]

DIE. DIE IN HELL. And I hope the soul of my late dog...eats at your souls and kills you in your sleep. 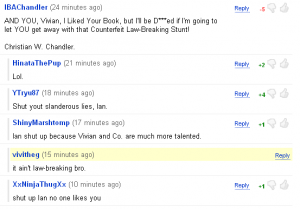 Chris on Vivian's book from a few months earlier. He changes his story a lot.

[Gives a creepy uncomfortable stare at the camera as he slowly switches the hand holding it.]

But aside from that, his boo- his book is the pages within the so-called Asperchu...series? [Scratches the back of his head, pauses to look up at the ceiling for a moment.] They are definitely ludicrous and horrendous and horrific. [Starts moving around again, picks up a book, then wanders some more.] Even a horrific s- even as horrific as within Vivian Gee's own book. And my pastor rissal- Elizabeth Foss, my pastor has read the book from cover to cover, and she HATES it. Sh- My reverend hates it. And I don't like it either because it is of disgrace...and slander, and mockery of my person and my character. Just about as much, but actually this [points to the TV] is worse. The Asperchu and everything there, that is worse than that book. I'm sorry Vivian, but that book is just no good. And I'm definitely gonna let my Elizab- let my pastor know about the Asperpedia and the Asperchu and to all the pow-through her powers within her church and the congregation and even the F! B! I! We will see you in Minnesota, and take you down personally, Mister ALEC BASON LARRY!

[Pause, head scratch.] We get the FBI on our side. [Long pause.] Your mockery of my person is not appreciated!

Udder'n dat, I leave with most everybody else in peace. Have a good day. Except for you three of which I mentioned earlier.

Within hours, Asperpedia's Mao made a rebuttal video calling Chris out on his hypocrisy.

The video was promptly given a prominent position on every page of the CWCipedia.