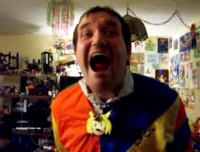 And here, we see the almighty Chandler unleashing his mating call.

12 January 2010 officially (01122010 Update.MOV) is a video uploaded by Chris on 12 January 2010. In this video, Chris, delusional as always, mentions talks about working with anime distribution company ADV Films, which shut down 4 months prior to the video's posting. He then gives a shout out to a mysterious girl named Ginger before raging over the Asperchu ads on his site. Also, Chris asserts his alleged heterosexuality by placing a Playboy centerfold featuring Marge Simpson on his rear wall.

At the end, he punches out his camera, thus ensuring many videos with skipping audio (or even worse) to come. Pay careful attention his hair in these videos: at first glance, it may not seem too bad, but look again. That's a proto-combover. Chris can't even go bald with dignity.

Alright, so with that aside, let's uh, get down to the meat here. Again, down with that god damn Alec! I mean, he pai--he paid off that--s goddamn...Jack Thaddeus just so he can take over the stupid ad space. Ugh, I mean, I would prefer Jack Thaddeus back at this point!

[Chris slams his fist to the camera and it intensely falls down.]

A few hours later, Chris posted up a second video, raging about various questions in his Mailbag. 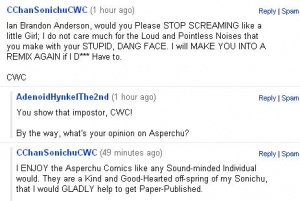 [Sighs] Just... further... [Dramatic glasses removal] update. I am so sick, and tired, of having to deal with all these people who have so many goddamn misunderstandings and mislabellings!

First off, Asperchu is not mine! I am sick and tired of being misa-misassociated with him. He is not mine, and I would never care to associa-ha-him, because HE IS A BUNCH OF CRAP! HE JUST LOOKS LIKE A PARODY OF ME, WITH A BUDDHA BELLY AND EXAGGERATED MANBOOBS! [mutters to himself indignantly while, as if on cue, he adjusts Muscle bra underneath his shirt] And I am so sick and tired of him...!

[Adjusts camera; pants for a few seconds as muffled mumbling can be heard in the background]

If only people would just understand me better and quit the mislabelings and the misunderstandings, and quit making offensive comments and offensive questions and officient statements, then maybe I would be more-feel more at peace! [he sighs again] Leave it at that for now. Ta- [video cuts off abruptly.]