Apparently, this is all it takes to get a video... 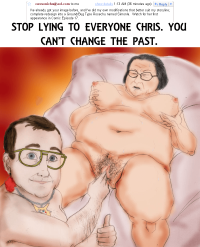 ...but surprisingly, this elicits no response.

I am Alive (officially 02042010 - I am Alive.MOV) is a two-part video uploaded by Chris on 5 February 2010. In reaction to the ads claiming that he died, Chris made this video to dispel those rumors, and to apologize to Evan and Alec stating that he'd kill off Simonla and that he was sorry for claiming that Alec keeps women captive in his basement.

Note that the ShecameforCWC.JPG parody ad with an Oedipal Chris and Barbara had been up for three days and he never said one word about it, even when he noticed the other ad claiming he's dead right next to it. Some fellow Christorians have theorized that perhaps nudity and matriphilia are calmly accepted around the Chandler household, while others propose that Chris is too dense to realize that the woman depicted is meant to be his mother.

In Alec Benson Leary Phone Call 6, Alec told Chris that the ads would be removed from CWCipedia on the condition that Chris would apologize for specific things – Alec had Chris writing them down, and in this video, Chris is literally reading a script in an emotionless, particularly insincere manner, on camera. While Chris obviously half-assed yet another precious task given to him, the trolls honored their end of the deal and nevertheless removed the ads from CWCipedia.

First off, I'm not dead, and I have a few announcements to make. Don't listen to that stupid Mao and his stupid advertisements. Don't [sic] I look dead to you? No, I'm alive, safe, well, and healthy. 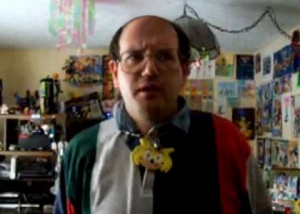 Thinning by the day.

That's for the announcements.

So... I'll admit Alec has a sizable fanbase, possibly greater than my own, currently. Uhh, I had—I originally had permission for using Simonchu in my comics from Evan, but then he took it away, Simonla was not mine, so I'm giving it back to him by killing her later. Uhh... I admit editing small article, I'll just delete it altogether later today—or later on.

Uhh... I just been—forgive me, but I just had to dig a bunch of snow. It's snowing now. My car's stuck.

And I apologize to Alec for—for taking Asperchu and his—rec—and his recreated characters... for re-editing and whatnot. A comic pa—there'll be a page later explaining all that. There's another apology I made to him earlier about pretending my mother... hmm. I apologize for accusing him for female entrapment and, uh, rumors about rape. It was never meant to be rape. It was just like you know...he had to—he had those four Rosechus in his basement. Kept 'em in cages. Treated them like hamsters. Ham—giant hamster wheel. Water bottle. Food pellets. No rape. Just hamsters. You don't rape a hamster!

And I had no excuse for not updating on some days, but real life just happens, though. That's my only excuse, real life, other than that, I have no excuse. And uh, I apologize for disrespect in the mailbags and belating updates.

Yeah, so with that. I'll leave you all with that, and I'm alive, safe, well. Okay, have a good day.