In "9 December 2009" (officially "12092009.mp4"), Chris complains about Jack Thaddeus's homosexual ads on his CWCipedia and demands that his fans in Europe donate him €1,000. Chris also states that he's heard rumors that Seth MacFarlane is planning on including him in a future Family Guy episode. Chris then pitches his idea for a Sonichu-themed Family Guy episode and ends his video by declaring that he has a special new gal-pal in mind to voice Rosechu.

Chris also leaves his cell phone number in the description, thinking MacFarlane will read it for some strange reason. However, MacFarlane obviously has better things to do than to listen to bad ideas by obese manchildren, so Chris basically created another way to get trolled by his fans.

His episode idea essentially amounts to Meg falling in love with him because of the CWCipedia and inviting him to an animation festival in Quahog. The festival subplot is (surprise!) completely forgotten at this point as the rest of the story is just about Chris, Sonichu, and Rosechu hanging out with the Griffin family. Sonichu and Rosechu offer Brian Griffin some dating education.

This video saw the return of the poor, tortured PSEye camera who, loyal as a dog, still records for Chris.

I am doing this through the PlayStation Eye, and Eye-Create once again, because my digital camera is fickle on battery power. The batteries should—are still good compared to—as—respectively noted on the battery tester I have, but, unfortunately, it goes down quickly, it goes up; it's variable, so forget digital camera. Anyway... aside from the impossible skips that may occur, I am here to make a few announcements. First off I have said the, uhh, CWCipedia, I, uhh, am looking to my European fans to make donations to the CWCipedia. Not only to, uhh, keep it up, but to help get rid of the God. Dang. Sh—horrible [removes glasses, shakes head, then whispers] homosexual ads that dang Jack Thaddeus put on there. [exhales sharply and shakes head] Anyway, donations are greatly appreciated, and, uhh, as they have noted on there, those who donate over 1,000 euros, place to—get to place their own ads there, no questions asked. And, uh—as for—with that out there—would like—also am looking for sponsors. And, uh—I am looking maybe towards the Coca-Cola company, for them to sponsor the CWCipedia, plus the Sonichu franchise. At least the Coca-Cola company in Europe—in European area, to make the donation to put their ads all over on the CWCipedia adspace. [spoken under breath] At least to get rid of those God-dang—[shakes head] but, yeah. Coca-Cola.

And, uhh—and, uhh, let's see. With that said, I note, I have an understanding that, uhh, there may be—there are rumors going around about, uhh, people who—about the people who do animation for Family Guy, thinking about making a, uhh, skit, in parody, in, uhh—not in, uhh, mockery parody of me on the show, but I would like to, uhh, make it clear that I don't want just a skit. If you're going to do anything of me, I would like to be involved and voice myself in the show, as well as—as well as the Sonichu character. Now I have my own story for at least one episode, and I'm willing to go multiple episodes in agreement with Seth McFarlane and the crew. Anyway, first off the rumored, drawn version of me that, uhh, looks like a Cleveland junior clone, NO. But, I have watched all the episodes of Family Guy, regardless of weight, and I drew a good version of myself, with these drawings I'm gonna show on here and put on the CWCipedia a little later on tonight... along with sixth page. 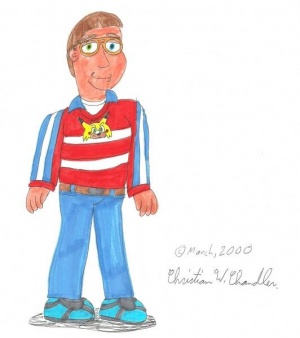 We all know that should be Sammy. 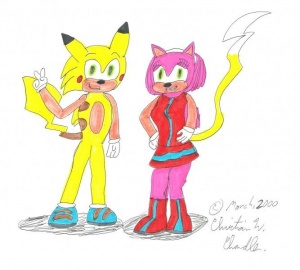 You can't see it in the thumbnail, but Sonichu's lips are fucking terrifying.

[Chris holds a picture of himself drawn in Family Guy-style up to the camera. It looks nothing like him.]

Anyway, there you go, that's a good version of me right there, to draw with the show.

[Chris puts the image of himself down and holds up a picture of Sonichu and Rosechu. It looks exactly like every other picture of them he's drawn.]

Also, yeah, my story idea. I have not written it up yet, but I am going—but I am going—I am planning on doing that. But, right off the bat, I have a start. Okay, here's the scenario for a story: Megan—Meg, is a fan—will be—will be a fan of my Sonichu comics. She goes onto the CWCipedia, reads every new page I put up, and she just really—and she just really adores me for, uhh, being a kind man and, uhh, all the good things about me, aside from the vicious rumors that trolls put up, especially like on the ED page, and then she sends—she puts a letter, a message in the CWCipedia mailbox... [nervous from the thought of girl (fictional or non-) talking to him] and it's just like, "Why don't you come down to Ro—Qua—Quahog? We got, like, uhh... a—an animation fest coming up. Uhh, you could come part—you could come participate, show off your Sonich—show off your Sonichu and stuff, and, uhh... meet with me."

That's what she would say. And I was like, "Hmm... yes." But then we cut... to, uhh, later on during the animation festival, and, uhh... and sure enough, come up—[gibberish] in my car, and Megan—and Megan's dere... with me, and, uhh, it's all—uh, it's all—it's all ver—it's all—it's nice little meeting of... you know, between me and the family—and the family dere. And then, also, you know—and, also, after the meet-and-greet there... um, I bring my two Sonichu Balls, and, uhh...—and release Sonichu and Rosechu... into the Family Guy world. And then they—and then they get to—and then they get together. Then, they greet the family, and, uhh, everybody meets, and... also, you know, they have a knowledge of what's going with Brian, as for me, as I've seen all the Family Guy episodes.

Mm, so... I have for story in this episode: Sonichu and Rosechu... help hook-up Brian and help him to maintain a relationship that he can actually, uhh, do better-off with, 'cuz... yeah, he's definitely screwed up a few times. No doubt about that.

Anyway, let's see, what else? Mm, yeah, that's fairly much what I have so far. More to—more to be revealed as I... wri—as I type it up. But—which, uhh, you know, these, uh, three images, as well as that story, will be put on the, uhh, [air quotes] Family Guy page on the CWCipedia, which I will create later night, to start off.

But, of course, starting off as such, uhh, I will put my own opinions about some of the aspects of Family Guy—at least, uh, my humble opinions—and, definitely, you know, [acting as though he's actually standing up for a real person] Meg does not deserve to be treated as she does. She's definitely a very beautiful girl. I don't care what anybody says; she's beautiful in my eyes...

Anyway... also with that, uhh, there's also some other opinions—another opinion tonight. Oh, and I would definitely say this to Stewie in his face and [inaudible]: you know, Stewie... you should have let that tower fall on you. Then, at least in the future, you'd have ended up straight!

Yeah, let's see if Stewie responds [to] that.

[sigh] Anyway, let's see... What else...? Yeah, and another thing, also, I would like to—also, on that—on that page, I would address the, uh, rumor, about, on the "Road to Germany" episode, where Seth got the bathroom sketch from a [holds up hands] Ghostbusters skit that I drew in, uhh, book number seven... I definitely put out(?) the question if(?), you know, [squeaky falsetto] he actually borrowed that from me, but, you know, either way, I'm cool. I'm just wanted to make sure, because... I don't know until I ask him personally.

Mm. Anyway, uh, that and... other things on my mind I'm not sure about, but... I can't rough(?) them outta my head right now, but they are noted on the Captain's Log... and in the previous entries on the CWCipedia.

I am Christian Weston Chandler. Thank you very much, and have a good evening.

[Chris totally fakes us out]

And another thing I'm not sure I even mentioned in the video... or till now: if this—if this show does go in process, like I said, I definitely want to voice myself and Sonichu. As for Rosechu, I have a [vocal squeak] galpal... that I—that—that has close—that is close—and, uhh, I trust [her]. She is not [a troll], but, uhh... we are good friends, and I feel that she has a great voice. She could voice Rosechu very well. [dramatic glasses removal] I mean that. Okay...

[gives us a thumbs-up, trying to fake us out once more; followed by suddenly spreading his arms spread and attempting to speak in a manly voice]