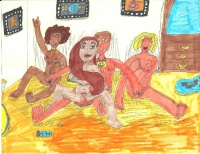 "If I was a homosexual or anything like that, would I not be having sex with THREE WOMEN?" 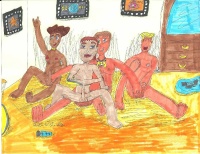 Warning - Naughty Women ;) (officially 10102009 Warning - Naughty Women. ;)) is a video in which Chris tries to use CWCRockin4Way.jpg, a drawing of himself having sex with three female members of his Guitar Hero "rock band" as evidence against allegations that he's a homosexual. He also specifically points out that one of them is "half-and-half" to refute accusations of racism.

Of course, by trying to pass a drawing off as a photograph, all Chris really proves is that he lacks the ability to distinguish fantasy from reality. He also accuses trolls of being immature, while showing off a Rule 34 drawing he did of his virtual harem from a video game. Real mature, Chris.

Interestingly, Chris only denies that he is gay, bisexual, or lesbian in the video. Classic foreshadowing.

Now. I would like to make it perfectly clear, but first I would like to state... THE update [dramatic glasses removal] that will be on the CWCipedia tomorrah-uh-duh-later tonight or tomorrow. A few more pages for the numb nine book. So, look forward to that [short pause] good viewers.

Now, for those who DARE continue to mislabel me as dang gaaaaay, homosexual, or bisexual, uggh... [shakes head] I'm straight. I. Am. Straight.

[Chris approaches the camera by maneuvering around something off-screen, grabs the camera, and holds it close to his face]

And I tell you what. If I was a s-homosexual or anything like that, would I not-would I be having sex...

[angles camera down and shoves CWCRockin4Way.jpg fully into the frame, with strips of paper taped over the genitals and nipples, including Chris's]

..with THREE WOMEN? Huh? Huh? Look at it! Look at it! I'm having sex with three women, and you know what? The one in the middle is half-and-half!

[Chris points camera back at his enraged face]

I am STRAIGHT. Get through your damn dirty immature skulls!

[sets camera back down with a forceful thud, meanders back to where he was originally standing by awkwardly stepping over the object from earlier, takes a moment to set himself]

Thank you very much [flashes victory sign with fingers] and have a good day.

[bends down to the controller to halt recording]