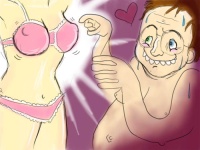 What Chris probably thought of while fantasizing about boobies and vaginas.

"I am STRAIGHT" (officially "IamSTRAIGHT" for both videos) is a series of videos in which Chris attempts to set the record straight about his sexuality once and for all. His first video is literally two sentences long, warning everyone to remember his straightness. He holds up a relatively tame picture of Britney Spears, apparently thinking that owning magazines with sexy photos of women in them is proof of his heterosexuality.

Chris follows this up with a 10-minute dissertation on how he deeply loves, respects, and understands women, insisting also that he wants to have sex with them. He seems to assume that heterosexuality demands more than a superficial physical attraction to women to be credible. In his attempt to laud the qualities of women, Chris ascribes to them numerous qualities, including having superior power, agility, and coping skills than men. Also, boobies and chinas.

Chris did these videos in a failed attempt to appease Clyde Cash to have his website restored.[1]

I, Christian Chandler, am straight. [holds up Britney Spears poster]

Don't you forget it.

You know who I am. But I have randomly decided to make this video because I am sick of all the false accusations and rumors and slanders that have been going around [farts] on the Internet about—against me. [inhales deeply]

So, I tell y—so, I tell you for sure and for true that I am straight. I could te—and I can tell you why from a lifetime of stories, but I'll tell it to you in just a few short minutes.

Anyway… most of my friends in my life… have been female. I've had only few male acquaintances. And they've definitely turned me off—the majority of them—because they are rude, crude, and inconsiderate… causing wars and such. 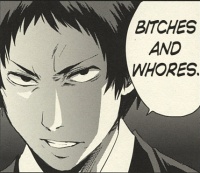 A lesson Chris refuses to learn.

But… women are so kind and sweet. And you don't have to look at any… pict—any—any of 'em in bikinis or in the nude… to know—to—to—not s—to fail to see the attrac—to fail to see the beauty in each and every… wonderful woman. But inside that beauty they all have caring qualities—the majority of them. Y’know, between them and me and the majority of the world… we all just want to be understood! [sigh] And I understand the ladies. I understand the women.

But… I do not need… to cons—to con—to fall—stoop down to a level of where the hormones—where my hormones would go out of rage… to appreciate… them as being my friends… and my gal-pals… even as—even as well as acquaintances… because I can only have one true sweetheart.

But anyway, gettin' to—over to the women… you cannot—you can definitely see… the sheer brilliance… of… their delightful personalities between each and every one of them. And yet some of them can… turn… and be very distraught… but we have to learn to… abide by them… and just… let it pass! Even if it doesn't pass… we still love them because… at one point, even befo—at one point, before they had—they did a 180… in th—in that sense… they were still caring! And they can be still caring. And just because they act in a harsh nature… even when they should be calm and peaceful… they still care… about… the men in their… lives. And especially the children… that she and her husband… put together… like I will be putting together with my… sweetheart. My sweet Panda… [sings softly] “Never gonna give you uuuppp!” 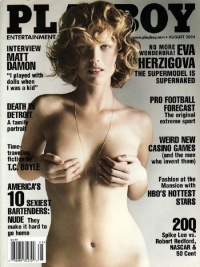 Chris's Exhibit A. While he wants you to believe he was fondling the picture of Eva Herzigová on the cover, he was in fact lusting after the Captain Morgan ad on the back.

[holds up issue of Playboy] And Playboy has been able to… help us in that sense to… better relate… and further our appreciation for the female species. The females, the women. The beautiful ladies. [grasps the magazine in both hands, as if holding the breasts of the woman on the cover, and inhales deeply] Mmm...

[puts magazine down] But I digress, beholding a Playboy, because I do not need to hold a Playboy… to further prove… that I am… straight. Because… I am educated between… my life—between—throughout my whole lifetime… and the classes I have taken, between sex ed, and high school, and real-life experiences, and my ins and outs in my sweetheart church—search in the past...

Given that I was thwarted by one female, I would not hold the grudge against her. 'Cause I'm sure that she is sweet to others… especially to… the men that had—are actually closer to her in her life than I have ever was, or ever capable of being. I still… [clears throat] will not hold the grudge against her. Yet I will—yet I have… drawn… previous times… moments of rage… and anger against. But… expressing the anger… in that s—in the sense of drawing… in the sense of art… but not… to put it into gory details, but… makin' it acceptable for even the—uh… to make it applicable to be TV-Y7… of that rating.

That is not total rage, because that is rage—negative rage, being put into positive. I put most of my rage into positive… outgoing—outcomes, positive drawings, positive inspirations… because I care… about the women.

And I even go as far… as to stoop i—stoop to one low level...

[There is a pause, as Chris's facial expression changes to a slight half-grin and he suddenly mutters...]

[He holds out hands and moves them up and down, as though feeling up an imaginary woman. He then appears to briefly do something else with his hands that you probably don't want to know about] Mmm...

I'm straight. I love the women… outside… [repeats hand gesture] and… inside… and… that should be enough to prove that I am straight… to everyone, even those who dare say otherwise. And those who dare say otherwise? Well… I can only say that… y'all be damned! But I would not hold it against you, because… that is a humble—that is your opinion. And even though it is… a whole bunch of lies… and it cannot be acce—it cannot be easily determined whether the originator is male or female… I will not hold those opinions against anybody… because… I care… and I care more about the women… but… I will… associate and cope with in a po—in a—ok—in a okay light… with those of my own gender. But… I will show more… affection and appreciation and care… for the women. For the women… [voice trails off into breathlessness for a moment] because they are surely the delightful, the more powerful, the more agile… the more… capable of coping with stresses in the lives… in and around us all.

Even the stereotypes. They can—they will express their anger… against it. But that is because they care about themselves… and they want us to appreciate them individually for who they are! But I digress.

I am straight… because I care about the women… individually. I appreciate their humble opinions… and as well as, uh, their outer beauty… [repeats hand gesture again] and their inner beauty… and to every one of them… I offer a hug. You don't have to get it in person… because you get—because you can easily get that from those that are very close to you.