Chris had several gal pals in his childhood. One, Natasha Turner, was essentially a babysitter paid by Bob to walk Chris to the bus stop. Chris read too much into the acquaintanceship, not realizing at the time that the money Bob handed him to give her was for payment, and believed she was a legitimate friend.

Tiffany Robinson is a former gal pal of Chris's from the days he lived in Richmond and was Chris's first crush. In Chris's words, "we would hang out now and then during school hours and play. Then in the 4th Grade, she dumped me for some other boy. I do not know much of what she has been up to these days".[3] In 2021, Chris said that she lived "somewhere beyond Standardsville" [sic] and that he had a crush on her.[4] Her current whereabouts, or if she is aware of Chris anymore, are unknown.

In 2008, early troll lordsillynipples impersonated Tiffany in order to catfish Chris into sending her a copy of his then-unreleased DVD.

Natasha Turner is a former gal pal Chris met at Providence Middle School. They were next-door neighbors for a while, often hanging out at the bus stop near their homes. She was slightly older than him and a "good girl". For a while he had a crush on her until he saw her smoking: "That was It for me right there".[5][6]

In 2013, when his illusions over his high school gal-pals was finally shattered, it compelled Chris to reevaluate all his past friendships, and at some point, he was suddenly struck by the revelation that Natasha, too, had been "Hired Help". He remembered that his father had given him money to give to Natasha "as payment for her Friendship and Attention". He figured she had been a sort of babysitter whose task was to "protect me to and back from the bus stop". This recollection was a "major shock" to Chris. "I laid in bed and slept with the shock. Stuck in my dreams; reluctant to really open my eyes to awake". It reinforced his new suspicion that "my friendships might have been a lie".[7][8]

Kellie Lyn Andes is a former high school classmate of Chris and one of his crushes. She was one of the girls who attended his 18th birthday. Their relationship meant a lot to Chris, as he kept in contact with her after high school, giving her a mixtape. He called her weekly for around a year before giving up (the reasoning behind which is inconsistent).

Tiffany Gowen is a former high school classmate of Chris. She acted as a compassionate friend, consoling him after his graduation meltdown [9] and bravely danced with Chris during Senior Prom after finding out he took his mother to prom.[10]

A decade after high school, Chris was determined to reunite with Tiffany.[11] His search ended in 2013 when he received emails supposedly from Tiffany (most likely created by trolls) telling Chris that she was purposely evading him. 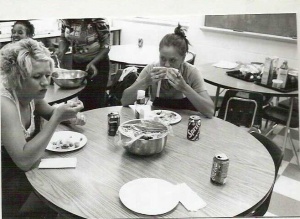 Sarah Anne Bevel is Chris's former classmate at Manchester High. She and Kellie Andes were Chris's lab partners in chemistry class, sat with him at lunch, and attended his 18th birthday party. She and her boyfriend were the only couple Chris was aware of during high school. "It was fun to just to watch them flirt with each other; I've could've learned from that, but my Autism and normal social phobias held me back then".[12] He was interested in the fact that she broke up with the "Lucky Dude" sometime later.

In September 2013, as Chris was trying to recontact his high school gal-pals for the sake of the 15th annual reunion, he was baffled that Sarah claimed to no longer know him, despite having been one of his "Closest Friends".[13] In October, trolls hijacked Sarah Bevel's identity and used her to inform Chris that his gal-pals had only acted like Chris's friends because "we felt sorry for him". This and further correspondence with "Sarah" caused him to turn against her. Having exposed Chris to uncomfortable truths, she moved onto his enemies list. In November he wrote a poem expressing his deep emotional pain "caused by the hurtfullest truth of close High School Gal Pal ("Hired Help"), Sarah Bevel. Total Adult, Condensating B---h". He even "remembered" that Sarah had questioned his heterosexuality back in high school.[14]

It appears that the real Sarah has discovered Chris's antics since high school, and is not impressed. On 19 December 2013, Kellie Andes shared a link on her Facebook for Chris's For J-R's Eyes Only.MOV video. Among those who commented on the link was Sarah, with the remark, "Ladies, look what we're missing. :P"[15] Sarah also apparently commented on a screenshot of Chris's Craigslist ad for used porn, posted by Molly Quarles, with the comment "Well that explains a few things....."[16] And on 27 December, Sarah posted the infamous picture of Chris in his mother's underwear with the comment, "Not only does Christian like to borrow mommy's undies, but he apparently 'spoons' with her as well. Just when you think you've heard it all".[17]

Molly Quarles is a former high school classmate of Chris. She was a cheerleader during Chris's Freshman Year. She shared a few classes with Chris. He remembered her as "a happy, giggly kind-of gal, and she was fun to be around". Chris recalled being paired up in a "dating match-up thing" held for Valentine's Day at Manchester High. According to Chris, it was "the ONLY match-up I felt was a good match-up at all back then".[18] In October 2013, after the "Hired Help" news broke, Chris frantically sent a Facebook message to ask if she was a false friend as well (and was reported by a Facebook user in the process).[19] 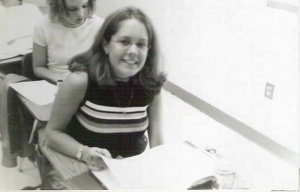 Miranda (or "Maranda") Joyce Mitchell is a former classmate of Chris. He described her as "a pretty girl, and... a big brain of my Circle of Friends".[21] Chris met her during his junior year in Computer Graphics class where they were partners and were required to design company logos for each other. Miranda thereby helped our hero out in his early website days with a redesign of the CWC's PokéSite 2! logo. This made Miranda the very first of his gal-pals to be exposed to the glory of Sonichu.[22] She attended his 18th birthday party, bringing as a gift "a planer [sic] with stickers".[23]

On 30 October 2013, Chris posted on Facebook about a recent discovery that all of his cherished gal-pals from Manchester High School had only put up with him out of pity for him.[24]

He asked his mother whether or not his friends had been real, and she informed him that in fact they had been arranged by his father.[25]

On 5 November 2014, it was revealed on a CWCki Forums thread that the "betrayal" was fabricated by trolls, to get Chris to leave the real gal-pals alone.[26]

Gal pals who befriended Chris as a result of his internet infamy. Some of these women are trolls as well, although (unlike the troll gal pals above) they interacted with Chris under their real names.