Soul Bonding is a CWC-ism and euphemism by Chris to describe his actions towards his mother, Barbara Chandler, during the time he was engaging in incest with her. What "soul-bonding" during the affair refers to is unclear, as Chris's definition of "soul bonding" has changed over time, notably during his stay at Central Virginia Regional Jail in his Jail Communications to various orbiters. However, several drawings Chris made regarding the act had alluded to it being an act of holding hands and/or getting in imminent sex positions, while others alluded it to being a specific sex act.

On 27 July 2021, Chris drew an art piece depicting "a basic visual representation of #PlatosSymposium for being on the good eyes for Inner Beauty as opposed to physical beauty." He uploaded the drawing to Twitter on 28 July, writing that:

Notably the drawing had been produced and uploaded around the time the Incest Call is estimated to have occurred. One of the "ships" depicted is of two people in a sexual position. One asks, "My love, does our soul bond and play satisfy you?" and the other answers, "Yes, it does. Thank you."

In the Incest Texts, estimated to have occurred around 27 or 28 July 2021, Chris texted about his enjoyment of sexual relations with his mother. He described in detail sexual acts between the two and stated that "when we cuddle", "I literally feel our souls bonding and coming together":

On 4 October 2021, in a jail letter to Kenneth Engelhardt and while role-playing as Jesus Christ, Chris began claiming that soul bonding involved a divine mission from God to heal his mother. He wrote:

On 8 November 2021, in a jail letter to Eels and the Eggman, Chris began to distance between soul bonding and sex. He wrote:

On 16 November 2021, in a letter to Kenneth Engelhardt and while role-playing as Jesus Christ, Chris again claimed that soul bonding is a form of healing. He further commented that soul bonding "does not necessarily constitute sex" - implying that it can. He wrote:

On 27 November 2021, in a letter to Kenneth Englehardt, Chris relayed news of Barbara's traffic accident earlier in the month, claiming that the soul bonding he had done had helped to protect her though he also noted her injuries of broken ribs and "a bump on the head." He wrote: 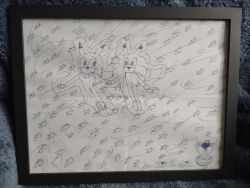 An undated piece of Praetor Jail Art, featuring Chris and Magi-Chan soul bonding.[7] Note that they are simply holding hands in this version of the term.

On 4 January 2022, in a letter to Bizzare Bazaar, Chris again claimed to have healed Barbara with soul bonding.

On 11 January 2022, in a letter to Kenneth Englehardt, Chris again made the healing claim.

On 11 May 2022, in a letter to Kenneth Englehardt, Chris again distanced between soul bonding and sex, claiming that the Incest Call and Incest Texts had been faked.

On 1 June 2022, in a letter to Helena Fiorenza, Chris mentioned the term, using it in conjunction with cuddling, hugs and kisses (but drawing a line between it and sex). He wrote:

On 4 June 2022, in response to Eels asking him what soul bonding is, Chris claimed that it involved New Age spirituality. He wrote in a jail letter that:

On 13 June 2022, Chris wrote to Helena Fiorenza. The letter has not been released and a summary provided by Helena's friend Eels and the Eggman instead. Eels claimed that Chris had drawn a doodle illustrating soul bonding and that it was just holding hands.[14]

On 4 July 2022, in a letter to Helena Fiorenza, Chris again claimed that him soul bonding with Barbara had saved her life in the traffic accident months prior and that he had looked into alternate timelines and felt that Barbara would have died, gone to jail in Chris's place, or hooked up with another man without his spiritual protection:

On 5 August 2022, in a letter to Kenneth Englehardt, Chris again repeated his claim that soul bonding Barbara was healing her: