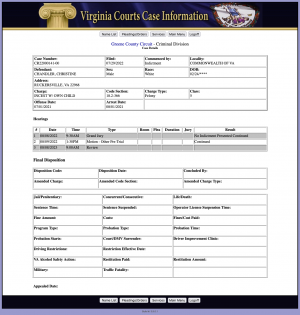 August was the eighth month of 2022. Significant legal proceedings to Chris's incest charge took place. His lawyer, David Heilberg, filed for an autism disorder deferred disposition, potentially meaning further court proceedings could be deferred and Chris put on probationary terms set by the court. Chris waived his right to indictment and the court scheduled a review for his case in one year's time. If the autism deferred disposition goes through, Chris's charge could potentially be dropped; if not, he could be formally sentenced.

The Greene County's General District Court opted to seal Chris's incest case in light of relentless pestering from the Unholy Quintet and out of concern of disinformation being spread - however, select information is still published by court staff.

Later in the month, a harassment campaign against Keffals resulted in a wave of Denial-of-service attacks against the Kiwi Farms and 1776 Hosting, causing the CWCki - which used 1776 Hosting - to go offline as well.

Meanwhile, in jail, Chris continued to draw his electric hedgehogs.