September 2012 was another quiet month like July and August were, probably due to Chris serving out his sentence. It did, however, mark the first anniversary of Bob's death, as well as the first time since Chris became famous on the Internet that an entire year has passed since he personally uploaded a YouTube video. 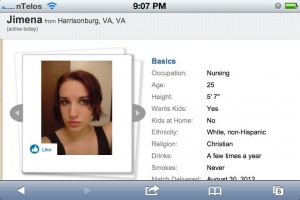 An androgynous troll tries to chat Chris up on eHarmony.
Retrieved from "http://sonichu.com/w/index.php?title=September_2012&oldid=232810"
Category: