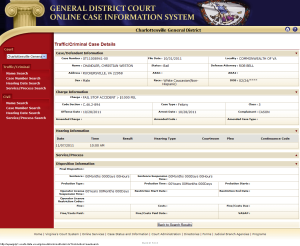 October was the tenth month of 2011. It was a mostly quiet month for Chris, who was still mourning his departed father and playing his PS3. Judging from an attempt to sell an old TV on Craigslist, the Chandlers may have been attempting to sell stuff around the house to get some extra cash. The Calling Out saga from August did not continue.

At the end of the month, things took an extreme and surprising twist, as Chris managed to put himself in very deep trouble with the law. As his burning hatred for Michael Snyder boiled up again, he entered The GAMe PLACe for a third time since his ban, resulting in several charges.