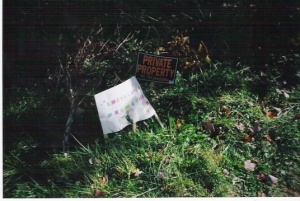 Chris's lawn was trespassed on 31 October 2008. The sign that was left would make a second appearance in September 2009.

October was a calmer, more bittersweet month for Chris. Many more important details of his life were leaked, including his parents, more nudes, and a home DVD he created. Towards the final third of the month, Chris is struck with devastating news: Blanca was leaving him. He was heartbroken, but not for long as he makes regular videos only a few days afterwards. #sonichu also comes out.