From CWCki
(Redirected from Contest)
Jump to navigation Jump to search

Ever since the early 1990s, Chris has entered a number of contests. Chris places great weight on his success and failure with regard to promotional contests. He becomes elated and sees victory as an indication of his own greatness when he wins, yet he becomes enraged and lashes out at the winners when he loses.

The contest's grand prize — a $1,000 Kay-Bee Toys shopping spree — was awarded to two lucky winners, one of whom happened to be Chris. This is one of the defining moments of young Chris's life, being the first of many contests Chris has entered over the years.

On 29 April 2000, a Pokémon-themed costume contest was held at Books-A-Million. Chris, who used to come regularly to the store wearing an Ash Ketchum costume, won the first prize, "a cool T-shirt".[1]

In February 2005, Cartoon Network held a contest inviting viewers to make a commercial for the Harvey Birdman, Attorney at Law Vol. 1 DVD set. Chris did not win the contest or even place in the top five. This inspired him to post a complaint on the Adult Swim forums.

"What would you do for a PS3?" contest

In November 2006, Chris entered Adult Swim's "What would you do for a PS3?" contest. In his entry video, Chris says he'd throw away the cure for autism if he had it, he would trade in his PS2, and would make a PS3 out of Pixelblocks, and shows off his Pixelated PS3. Needless to say, Chris did not win the PS3.

In June 2007, Chris entered the PaRappa the Rapper Contest, which required contestants to film themselves performing an a capella version of either Chop Chop Master Onion's rap, Instructor Mooselini's rap, or Cheap Cheap the Cooking Chicken's rap. The grand prize winner of the contest would receive two PSPs and an all-expenses-paid trip to Seattle for the 2007 Penny Arcade Expo. Chris hoped that he would win, so that he could bestow one of the PSPs to his beloved Megan and invite her to accompany him on the trip, thereby creating an opportunity for her to give in to her obvious passion for him.

Chris's video made it into the top 10, from which the winner was to be selected from a vote by PlayStation Underground members in July 2007. Despite a campaign on the part of Chris, the competition was won by Adam Stackhouse, whom Chris bears a grudge against, as he felt Adam broke the rules[2] by having music and multiple people in his entry. Chris loathed the 2nd and 3rd place winners for having music as well. In actuality, the beatboxing in Adam's video counts as a cappella. Furthermore, another top 10 finalist claimed that he had removed his own music to avoid breaking the rules, but Sony said it was fine.[3]

Relentless vote stuffing did earn Chris a reward, however. The rules state that finalists would, "...get their Submissions published on PlayStation.com, and will receive a copy of the game PaRappa the Rapper for the PSP® (PlayStation®Portable) system and some PaRappa branded premium items such as a PSP skin, PSP charm, and a PaRappa signature beanie (ARV $60)."

Chris created Li'l Chris at the "Create-a-Critter Workshop" after winning a gift certificate from a radio station sometime in his early 20s.[4]

In May 2010, Chris won four tickets to an EXTREME ACTION SPORTS show from a radio call-in contest. As he could not find anyone else to go with him, even after he called the members of his Church's Young Adult Social Group, he was forced to scalp the tickets in front of the stadium and then sit alone in the bleachers beside a "lovey-dovey couple". This event prompted the Greene County Conspiracy video.

Chris entered the GameStop Be A Star Sweepstakes in October 2008. The competition required entrants to send in a photograph of themselves in a "guitar hero pose" for the chance to win a $400 GameStop gift certificate.

Several trolls caught sight of Chris's entry and, mistakenly believing that the person with the most votes would star in the Guitar Hero game, encouraged people to vote for Chris. Due to this, Chris went on to win the competition.

In August 2010, Chris won another GameStop gift card, this time for $50, through participation in a blood drive.[5]

In February 2010, Chris entered a contest for the movie Jackass 3D, in which the person who submitted the best prank would get to appear in the film. Needless to say, Chris did not win, as he violated the rules by sticking his pickle in the snow for 15 minutes. Jackass-style pranks were forbidden in this contest; entrants were supposed to send in plans or sketches.[6] 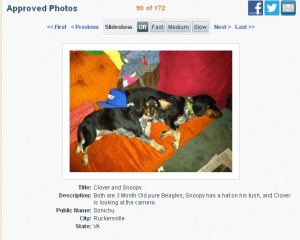 Patti has been betrayed.

On August 1, 2012, trolls discovered the existence of Clover and Snoopy. Chris decided to take pictures of them and post his photos on the internet in an attempt to gain votes for a contest. In the description, he writes, "Snoopy has a hat on his tush, and Clover is looking at the camera." The beagles were given positive comments and one person even asked for the dog breeder so they could have one.[7] However, Chris did not win the contest.

The prize is a 3D print of a custom figure.[8] Chris would use it to 3D print his own Christine Chandler avatar.

Unfortunately for him, he failed to follow the guidelines set by the contest.

According to the rules, the entries will be judged on:

Chris neglected to post a catchphrase with his character.

He did not even enter the right category. The twitter page where he submitted stated that the week's entries were for Magic-type characters, however, he entered a Light-type (missing the contest for that type by several days). From the contest page[9]:

He tried again a few days later, minutes before the contest deadline, providing a catchphrase and entering under the right category.

A yearly poll conducted by C-VILLE Weekly, a Charlottesville, VA publication. The poll for 2017 was conducted in two stages – one where people could submit their own entries to the poll and a second where finalists would be chosen by staff for another round of public voting.

In May 2017, Chris was added to the poll under the "Best Local Minor Celebrity" category. He took to Facebook to announce it and asked his fans to vote for him.[10]

Once it was discovered that anyone viewing the poll could add entries and that people could vote multiple times by clearing cookies or opening a private browser session, shenanigans ensued, with joke entries based on Chris getting stuffed into the poll.[11] Chris took the lead for a time.

However, the joke entries quickly grew out of control. Chris tried to run damage control,[12] saying to "not add my name, or any other similar versions of, under Any Other Category; I am Not a Place or Event, and I have not been on television, recently."

Ultimately, the C-VILLE Weekly staff took notice and deleted the Chris references from the poll. Annoyed, Chris complained on Facebook, posting, "I did not make the finals. Thanks a lump for over-voting me out, you Trolling Stupids."[13]