On 25 September 2008, Chris recorded himself making sex videos. They involved him making disturbing animal impressions, disrobing, and then finally mass debating and jizzing navy into a clear plastic cup. Chris was apparently chatting with then-future heartsweet PandaHalo while gratifying himself in his parents' kitchen. These videos were recorded near the height of Chris's relationship with Blanca, almost a month before she officially broke up with him and only four days before Chris sent her a letter pledging his undying love.

The background for the videos is the Chandler family kitchen, which is piled high with junk. This is also where the family PC is located. The short video clips were taken with a webcam and are completely silent, adding to the overall sense of terror.

This is the same room where Chris was later caught mass debating.

Chris makes a terrifying, bug-eyed face at the computer screen and shakes his head. He then turns to the side, puts his curved hand up to his mouth, and bangs his head back and forth.

Chris raises his arms and scratches both sides of his skull while shaking his head back and forth and making silly expressions. He runs his hands down the sides of his face and then turns his attention back to the computer.

Chris raises his eyebrows and makes a silly, wide-eyed grimace. He uses his left hand to push his right arm behind his head and sticks his long tongue out in an attempt to lick his elbow. He tries for several seconds but fails by about two inches. He scratches the back of his neck, and then repeats the procedure with the left elbow, missing by an even wider margin.

Chris smiles a disturbing smile and types on the keyboard. He then suddenly pulls up his green polo shirt, revealing a separate, red T-shirt underneath — the sleeves of the red shirt are clearly visible — although the bottom of the red T-shirt stops just below his large, flabby breasts, forming a kind of improvised sports bra. The red shirt is apparently tight enough to function as a support garment, and may have belonged to Chris when he was a young child.

Chris unbuttons and struggles with his ill-fitting green polo shirt, grimacing with effort, eventually pulling it over his head. The red shirt comes off with it. Chris, shirtless and wearing the Sonichu medallion, repositions himself on the chair. He smiles a creepy, forced smile.

Still topless, Chris crosses his hands in front of his bosom and uses his index fingers to encircle each of his nipples simultaneously. He wears the same creepy, contented smile. 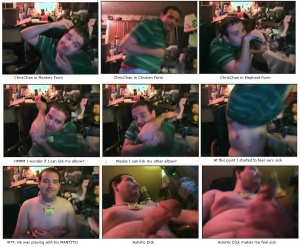 Chris jerks off in his own kitchen, making it even less sanitary than usual. Also: animal impersonations.

The webcam is positioned below Chris's testicles. They are shaved, as is his entire pubic area. Chris strokes his erect pickle with his left hand, and seems to use his middle and ring finger to do most of the work. His index finger appears to be pressing into his middle finger to provide extra force. This is oddly similar to how he holds a pencil.

Chris's manboobs jut out from his body alarmingly at this angle, like tiny mountains. Chris looks off camera, presumably at the computer monitor.

(Archive.org Version - Not as long as the original video, missing content based on the screencaps.)

Chris strokes his erect duck with his right hand. His flabby torso and disproportionately large nipples are the only other things in the frame. His skin is an odd, inhuman tone, much like the inside of a McDonald's french fry viewed under fluorescent lighting. This is possibly due to a glow from a computer monitor, or some kind of unholy aura Chris emits while ejaculating.

A wild fapcup appears. Chris positions it below the head of his penis. Chris's DIRTY, CRAPPED BRIEFS come into the frame. They are gray with filth, although no actual fecal matter is visible. Chris begins jizzing and catching his navy in the small cup, which appears to be slightly wider than the head of his penis. Chris lets go of his penis. His glans appears to be swollen to the size of a chicken egg, possibly due to the penile fracture that put a bend in his penis, or his retarded death-grip, or both. Either way, it is out of proportion to the shaft.

Chris appears to fumble with the cup off camera. His penis is in full view, limply resting against his briefs but still apparently engorged. An orange object flashes past, and he leaves the frame to do who knows what.

(This file is included in the .zip downloadable [1] )