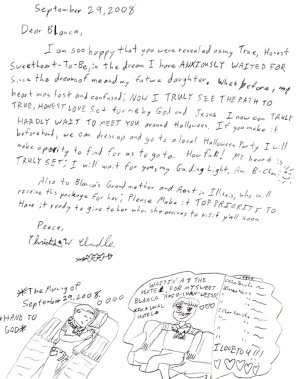 On 29 September 2008, Chris sent a package to his sweetheart Blanca Weiss. In it he enclosed his medallions, as well as a heartfelt love letter expressing his devotion to the woman he believed would be his lifelong companion and the mother of his prophecized child.

A few weeks later, his medallion was in a pickle jar and Blanca had unmercifully dumped him.

The letter represents the peak of Chris's infatuation with Blanca. While their relationship had been through many ups and downs over the previous two months — partly due to the interference of trolls like Lordsillynipples, partly due to Chris's attention wandering towards other would-be sweethearts — at this point Chris believed beyond all doubt that Blanca was real and that she had made plans to come to Charlottesville and meet him some time in the next month.

The preceding night, Chris had a dream about meeting Blanca, which he interpreted as their relationship receiving the indelible GodJesus seal of approval. That's the dream that the cartoon Chris is experiencing at the bottom of the letter (described in more detail in his e-mail to Blanca, also sent on 29 September). Likewise, "Ami B-Chan" is a (sickening weeaboo) pet name Chris coined for Blanca during their e-mail correspondence.

The primary trolls behind the Blanca identity received the letter and medallions on 9 October, letting the world know not long afterwards. Chris refused to believe that his sweetheart had betrayed him, though, and in fact the supposed theft of the package seems to have had little effect on him at first. He spent most of the second and third weeks of October focusing on the LittleBigPlanet beta and the newfound threat represented by Jimmy Hill.

On 20 October, however, Blanca officially dumped him, supposedly over some of the images acquired and leaked by Lordsillynipples. The shock sent Chris crashing into slumber, as chronicled in the Captain's Log of 21 October.

Today, the letter is in possession of Krapple mod and CWCki editor Anonymous.