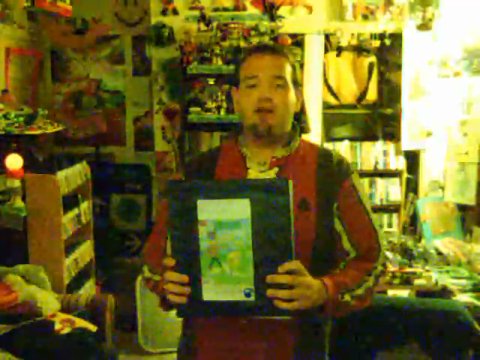 Chris shows off the Scrapbook of Fail to prove he is the real Chris.

The Scrapbook of Fail was a scrapbook created by Chris that consisted of two giant black binders holding every comic Chris had drawn, his hand-drawn Nintendo Power magazine, and plans of the CWCville Shopping Center.

On 24 March 2009, PandaHalo released an entire scan of the scrapbook she received from Chris, which had excluded the fan mail he had also stuffed into the scrapbook.

At first, it was thought that the scrapbook was destroyed in the fire at 14BC, but Chris revealed in November 2015 that the scrapbook had indeed survived, along with countless other paper documents, some of which were finally thrown away after renovations began.

A staggering amount of new art is revealed, including many pieces that have appeared in other places in different contexts, indicating that Chris is in fact so unoriginal that he often recycles his own pictures.

While reusing pictures as "stock" for various promotional materials is acceptable in the case of a multi-billion dollar, multi-national company such as the Disney Company, Chris hardly qualifies, given that he is barely able to put out one comic a year, and the Disney Co. is able to run multiple international theme parks simultaneously, on top of production of many different film projects at once.

Appearances in the comic