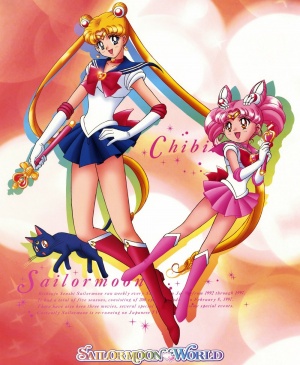 Coerced into saying he was gay on YouTube, Christian Weston Chandler employed several nonverbal clues to signal to his fans that he was, in fact, straight. Among these was the Sailor Moon Poster of Fail, which Chris later explained he looked at every night to help keep him straight.[1] Chris hasn't realized the irony he created, as most people would use the fact a man has a poster of Sailor Moon on his wall as evidence that he is gay, not as evidence to refute it.

In typical Chris fashion, the revelation that he needed an object to remind him of his heterosexuality only served to tarnish his reputation even further. This is not the first time that Chris has referred to heterosexuality as a status he struggles daily to maintain, nor is this the first indication of his sick lust for anime girls.

What is new is that of all the posters he could have chosen, Chris decided to use one showcasing underage characters. On the right of the poster is Chibiusa, Sailor Moon's 8-year-old daughter from the future, while on the left is Usagi Tsukino (a.k.a. Sailor Moon herself), who is 14–16 years old. Now keep in mind that he stared at this specific poster to reinforce his sexual appetite. All in all, it doesn't matter which girl he looks at; he is still a pedofork, at least in his home state of Virginia.[2]

It also has to be noted that, like many young anime females, Usagi's future daughter is distinctly tomboyish in appearance, which only strengthens claims that he is a homo pedofork.

The poster was presumably destroyed in the 10 January 2014 fire. This may be one of the factors that resulted in Chris starting to support homosexuality (but still hate JERKS in general).

Chris would revisit the concept in 2018 when he taped a drawing of his wife and husband, Cryzel and Magi-Chan, to his bedroom ceiling, as a way of furthering his delusions that the fictional characters are real.