The original troll and our hero. 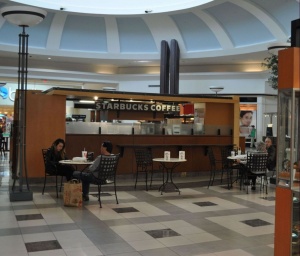 The Starbucks in Fashion Square Mall, as it appeared in April 2015.

Hanna (later retconned as Fandanna) is an IRL troll notable for smashing Chris's heart down to 15%. To add insult to injury, this was right after the Heart Level jumped from 20% to 100%. Little is known about Hanna except that she works (or worked) at the Starbucks Coffee in Fashion Square Mall and likes Chuck Paladuck [sic], director [sic] of Fight Club.[note 1] Hanna, realising that this joke was going on for too long, eventually told him that the date was a joke and that she wasn't interested in being with a fat, balding, 23-year old autistic manchild. As a result, Chris let out a loud, anguished "NOOOOOOO" in his last conversation with her, which got him banned (briefly) from the mall.[1]

Chris's run-in with Hanna was memorably recounted in Sub-Episode 2: Christian Chandler in "The Rise & Fall of My Heart". She has not been seen again, either in the comic or in real life.

Chris has last referenced her in a TSSSF card of his, addressing the failed date with her.[2]

Since the comic's first issue (Issue 0) specifically states that all people in the comic are fictional and any relation to real life is coincidental, it is of course natural of Chris to go against this and completely name drop and add in a real life person. Chris details the events to the last detail- 1 year and eight months since the love quest began, and he has been recovering from a previous broken heart, currently at 20%, and eating 8 chicken nuggets. Fandanna/Hanna approaches in a shine of light, saying she had heard he was looking for a girlfriend. The two introduce themselves and she asks him to have coffee at the shop later. Chris freaks out internally, declaring his love quest over, his heart quickly making a 100% recovery. While he waits for her to arrive, Rosechu appears out of nowhere to say she had heard about the 'date', and Chris is happy all his hedgehogs are cheering him on. Then, he asks her to spread the word around CWCville (as it's a girl's duty to gossip). She first calls Bubbles, who has not been introduced and technically Rosechu should not know (until this episode became Issue 4, she did not know the Chaotic Combo- they appeared in Issue 3, and only Sonichu was seen meeting them at first). Chris and her talk, Fandanna/Hanna has an interest in playing guitar and reading Chuck Paladuck (as you know, he's the Director of Fight Club *rated R*). The talk immediately becomes about Chris as she asks him about the medallion, and he pulls out the Sonichu scrapbook. After the date, Chris gives her a "double-take flirt (whatever that is), then decides to call his entire family about meeting a girl and takes out his dating sim game to find out some dating tips. Rosechu is then seen talking to Wild (again, she should not know him when this was in Issue 2), and states if he were human, he'd fall for Fandanna/Hanna too. She stops briefly since her women powers cause her to hear gossip. Fandanna/Hanna's co-workers's ask if Chris is dreamy and if they hear wedding bells. Fandanna/Hanna explains that the date was a joke and it was the boss's idea to set her up (Since women would NEVER get the idea themselves to be mean to Chris, assuming the boss is a JERK). Rosechu is clearly holding the place of Chris's "gal-pals", as she tells Wild she will call him back and pities Chris, knowing it is the right thing to do to tell him.

Meanwhile, Chris is loitering and sitting on the floor, finding some "good" pick up lines to lay on Fandanna/Hanna ("So, do angels have names?"). Rosechu tells him what she overheard and, because she's not Sonichu or any of his male characters, Chris does not believe her and decides to go ask himself, asking Rosechu to keep his spot warm (???). He meets up with Fandanna/Hanna and point-blank asks if the date was a joke, to which she says she's sorry, but yes. Chris pleads, asking if any of their special moment meant anything, to which she responds with a simple "no". Chris's heart shatters to 15% and he belts out NOOOOOOOOOOOO! The ending is Chris sending her an email trying to get her to pity him, complimenting her and saying he has had his heart shattered and she made it all better. He believes telling her he was on the Honor Roll will help, and she knows where to find him if she changes her mind. He then asks if she's boyfriend free, and if she smokes (smoking is a turn off for him). Whether or not he actually emailed her is unknown. Perhaps this was a plea for her if she were to come across the comic.