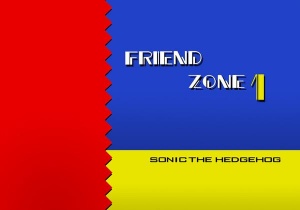 Friend zone is a term that refers to a relationship in which one person desires a romance, but the other is interested in friendship only.

Chris has rarely been able to even form a casual friendship with a woman, and generally just harasses the ones who react to him with something other than hostility. Nevertheless, his single-minded focus on going all the way and getting laid has led him to view the concept of the friend zone with contempt. Friendship, in Chris's mind, is merely an excuse used by women to avoid giving him the china he deserves.

Nowadays the "friend zone" is a common topic in discussions of romantic relationships. From one perspective, the friend zone is where guys wind up when they spend too much time getting to know a woman without trying to make a move towards a more serious relationship. Eventually, the woman views them as "just friends" (or "like a brother", to use one variation on the theme) rather than a potential lover.

From another perspective, a woman might value her friendship with a man too much to take the risk of advancing to a more serious commitment, which could lead to an ugly break-up and the end of any sort of relationship with him.

It's possible for a woman to enjoy a man's company without wanting to bed him (and for a man to likewise feel the same way about a woman). Most people are capable of accepting this fact, even if it's a bit difficult to deal with when one has been "friended" by the object of one's affection. Chris, of course, has other ideas.

Chris on the friend zone 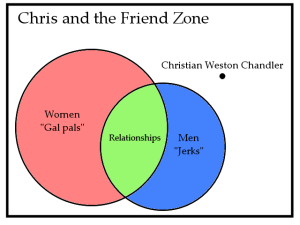 Chris and where is he in the Friend Zone.

Like many other supposed "rules" related to abstract ideas, the friend zone is in fact a pretty nebulous concept. Chris, unable to think about sex, dating and relationships except in the most rigid, inflexible terms, characterizes the friend zone as a law; a hard and fast rule that he apparently believes has been forced upon him by some unspecified authority. (This is similar to his interpretation of the three-date rule.)

In Mumble 4, Clyde Cash had a brief discussion on the friend zone with Chris, brought on by Chris's assumption that Sarah Hammer was interested in him romantically simply because they were neighbors. Chris responded to Clyde's assessment of his friend zone status by talking about the movie Just Friends, which he also cited in a Mailbag question several months later.

In Mailbag 4, a correspondent asked him what law he would change if he could change a single one. (His intention was probably to bait Chris into discussing the "dumb laws" preventing teenage girls from taking off their clothes in public.) Chris responded with a tirade against the friend zone.

Later, he expanded his opinion somewhat in the Common Questions section of the Mailbag. In this case, a correspondent quite reasonably asked, "What happened to a woman's right to choose who she wants to be with?"

Chris's characterization of "we're just friends" as an "excuse" is revealing, both in regards to his ideas about women and his view of himself. He cannot imagine a rational explanation for why a female friend would not want to have sex with him. Instead, he believes that women have invented excuses like this one because for some reason they fear a sexual relationship. If he is attracted to her and wants to sleep with her, he feels that she is obligated to return his interest and help bring his degenerate fantasies to life.

In August 2017, Chris replied to a Tweet by artist VimHomeless, concerning the friend zone:

This is Chris's first comment on the friend zone since coming out as a transwoman. In his comment, Chris assumes the perspective of a female, with the awareness that it is usually the female who wishes to only be friends. It is also clear that Chris is attempting to justify the female decision, possibly given his distaste for the male species. However, having never actually subjected anyone to the friend zone, Chris's explanation is convoluted at best.

Gal pals and the friend zone

Chris's comments about the friend zone shed a bit more light on his relationship with Megan Schroeder (and its spectacular collapse). While Megan was happy to enjoy an ordinary, platonic friendship with Chris (which, most observers would agree, is far more than he could ever have reasonably hoped for), he clearly couldn't get his mind around the notion of a woman who didn't mind his company, but didn't want to have sex with him. From his perspective, she was "making excuses", since there's no way she could have been sincerely interested in nothing more than a good friendship. Hence his refusal to quit subjecting her to physical pressure, his assumption that only sexual inexperience prevented her from wanting to fuck him, and so on. Chris's frustration with being in the "friend zone" reached the point where – according to him – he had to draw ShecameforCWC.JPG in order to prevent himself doing something infinitely worse.

Even after the Megan debacle, Chris was still oblivious to the concept of friend zone whilst dealing with the Wallflower. Chris revealed in his video "Damian Antaria", PLEASE, Don't Leave Me - I NEED YOU!!! that she had been consistently telling Chris that she "isn't ready for a boyfriend". He is not aware that this is a commonly used technique for rejecting people, and that he had been seen as nothing more than a friend – even before the Wallflower found the CWCki. Since he had to be told multiple times that she wasn't ready for a boyfriend, this implies he went past the boundaries of good taste multiple times despite being told it was unappreciated. This surprised no one.

Oddly, on 31 January 2010, long before the Wallflower fiasco occurred, Chris posted in the Sonichu Forum that he had been friendzoned, and felt crestfallen about it. The most likely explanation for Chris's actions towards the Wallflower was that he was trying to follow his own amazingly bad advice, and treat the friend zone as though it were an obstacle to overcome. We all know how that turned out.

Even after both the Megan and the Wallflower debacles, Chris still showed that even years later, he still hasn't learned about this concept. While his relationship with Doopie was almost exclusively customer-merchant, Chris treated her as another gal pal with him doing many creepy things, which include spamming her business e-mail, responding to multiple of her tweets (with a big chunk of them ending with "darling"), and even tagging her in a tweet for National Girlfriend Day. Even after Doopie made very clear that she was not his girlfriend, blocked him on Twitter and Patreon, and leaked a bunch of emails from Chris onto the Kiwi Farms, Chris still believes that he has a chance to get into Doopie's pants, saying that she's only "temporarily" on the trolls' side. He also made a Twitter sockpuppet to continue to follow Doopie and other female artists that also blocked him.

Chris and the friend zone

In Late November 2019, after having been subject to prolonged sexual harassment and solicitation over the internet by Jacob Sockness, who claimed that a sexual relationship would bring the Dimensional Merge into motion, Chris had finally made a breakthrough, after witnessing Sockness attempt to turn him against his other orbiters. Chris formally rebuffed Sockness over Twitter, insisting that such a relationship was not necessary and banishing Sockness to the friend zone.