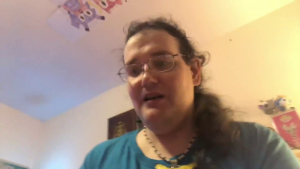 Chris has a drawing of his wife and husband taped to the ceiling so he can look at them while he's in bed.

The polyamorous marriage is an escapist fantasy and maladaptive coping mechanism brainwashed into Chris by the Idea Guys. Since March 2018, Chris was led to believe he is in a bisexual marriage with fictional OCs. Magi-Chan and Cryzel Rosechu tied the knot with Chris in March, with Sylvana and Mewtwo officially joining in later. In other words, the real sweethearts were the ones he made (up) along the way, alongside a copyrighted Nintendo character.

Arguably, this is one of Chris' most bizarre (collection of) sweethearts to date. Formerly, Chris only desired real-world relationships; in the Mailbag 32 seven years prior, when a fan suggested real dolls for companionship, Chris angrily replied that he would "NEVER EVER SETTLE for such a PRETEND RELATIONSHIP." His change of heart into accepting his imaginary friends for relationships may have been influenced by subconsciously understanding that he is unlikely to find a real romantic partner at this stage in his life and with all of his baggage being public knowledge. On the bright side, his Love Quest appeared to be finally over.

As a coping mechanism, the imaginary marriage eventually failed to keep Chris satisfied. By early 2021, Chris was lamenting his loneliness and expressing a desire for real-world relationships. This can be seen in the lonely feelings chat from March, where in a rare moment of self-awareness, he acknowledged that his imaginary friends cannot assuage his loneliness as they are not truly with him. With his fantasies and reality both leaving him without a satisfying end to the Love Quest, Chris ultimately resorted to an incestuous affair with his own mother. 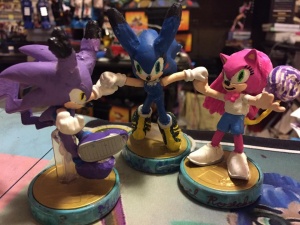 Chris and his initial romantic partners.

The seeds of Chris' marriage were originally sown when Chris announced in January 2018 that Magi-Chan—previously known to be in a relationship with Silvana—was now married to his mentor Mewtwo.[3]

The Chris-Magi-Chan-Cryzel polyamorous relationship/marriage began on 26 March 2018 when Chris announced that his sweetheart search was over... yet again. He did not disclose that he was now married. He later mentioned that the supposed relationship involves three people (from the wording it is himself and two others), implying that he was in a polyamorous relationship at the time. Their identities were not known at the time, and because he claimed that they all knew each other in person,[4] people assumed that Chris was in a relationship was with two actual people. He later said that one of them (Magi-Chan) was his "loving boyfriend",[5] with the implication that the other (Cryzel) was a woman.

On 10 April 2018, Chris came out as bisexual, apparently after discussion with them.[6] Days later, he uploaded a disturbing video, Dick Licker; that is I., in which he licked an image of Magi-Chan's penis drawn on a wall. He also updated his Facebook to note that he is a bisexual transwoman, "interested in men and women".

He affirmed that he gave oral sex to Magi-Chan to a Twitter ween.[5] Apparently, Chris's relationship is not merely polyamorous but open, as he claims that they have no objection to his return to prostitution. They also seem to be okay with Chris's Facebook and Twitter avatar being fanart from a member of the CWCProtectSquad depicting him being kissed by a female fan, as well as Chris hitting on Bryanfrogboy. 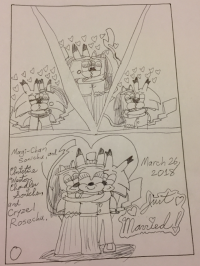 The Chris and Magi-Cryzel wedding portrayed in Sonichu #13.

On 30 April 2018, Chris introduced his fan base to Cryzel Rosechu, calling her "a very close gal" and that he had "promised her" he would make an Amiibo figure of her. He then liked a comment from a fan which congratulated him on revealing one of his significant others.[6] In Beedee, Beedee, Beedee; I’m Back, Buck!, he implied that Magi-Chan was the other lover.

On 5 May, he released a preview of a special mini-comic, to be included in Sonichu #13. It depicts him, Magi-Chan and Cryzel Rosechu getting married. The comic is dated 26 March – the same date as when Chris announced his sweetheart search to be over.

When questioned by a fan about the relationship, considering Magi-Chan was married again, Chris replied:

"Polyamorous relationships and marriages are very cool there. Sylvana (YES, her name is spelled with a “Y”) is Totally Cool with Cryzel and I being part of the wedding tree. Mewtwo was skeptical at first, but he came around, and he really likes me too. And you know Mewtwo: he has a good heart, but Cross Him, and you WILL REGRET IT LIKE TEAM ROCKET DID!"[7]

By late May, the sweethearts' troll status had become obvious, and several pieces of evidence linked them, and Chris's recent bizarre content, to the Idea Guy, who was thought to have stopped involvement with Chris after being doxed in January. However, Chris made two tweets[8][9] on 25 May acknowledging and calling out the Idea Guy, yet still referred to Cryzel and Magi-Chan as his sweethearts, and restated his bisexuality, in the Copitz interview the next day.

At some point in June, Silvana Rosechu and Mewtwo were added to the marriage.[2] It is worth noting that Chris rejected a potential sweetheart in favor of his fictional characters, suggesting that he is happy with his current relationships.

Chris described his marriage in some depth in the Count Dankula interview of June 2018.

3 August 2018: Magi-Chan persuaded Chris to publicly expose the Idea Guys by chronicling his experiences for future generations. The result was The Awakening of a CPU — a short story.[10]

26 February 2019: Following the release of the Pokémon: Detective Pikachu second trailer, Chris remarked that husband Mewtwo was indeed involved in the production of the film:[11]

11 March 2019: Chris gave the unfortunate news that Mewtwo was struck ill, but was on his way to recovering.[12] Despite being a long-time Pokémon fan, he somehow failed to remember the instant convenience of Pokémon Centers: