Kidasuna is a fantasy world created by Jacob Sockness, later used to manipulate Chris. It is inhabited by a fantasy race called the Rokat and includes other characters such as alter ego Michiro and Jakoba, the god of war and death.

Although Sockness's influence over Chris has waned, the Kidasuna lore he brainwashed into Chris still remains intact in Chris's fantasies, as Chris operates under the delusion that works of fiction all exist in an alternate reality.

Sockness is a bisexual, autistic man from San Francisco, California who developed an obsession over Chris. Following the Idea Guys' lead, many enablers realized the way to scoring an in with Chris was to role-play with him, including Sockness, who had a preexisting mythos which happened to mirror many of Chris's beliefs, making it easy to shoehorn Chris into it.

Like Chris, Sockness believes he is divine and can travel to an alternate world. Sockness considers himself a messenger or descendant of an alien race called the Rokat from a world called Kidasuna, located in dimension 1218's Andromeda galaxy. He has many imaginary friends from this world, mostly gods and goddesses such as Jakoba, a violent demon of war, death, and chaos and Michiro, an alter ego of Sockness.

Unlike Chris' beliefs, however, Sockness' system is of a more overtly religious bent, although Chris' ego has resulted in a similar shift as time passes. Sockness has written numerous books that consist of an incoherent mishmash of lore and magical rituals, all dripping with jargon so incomprehensible the book could only be understood by Jacob himself. The rituals are said to have many effects, from invulnerability to the killing of others. The jargon and difficulty of acquiring some of these items make these claims impossible to test, although one can easily guess the result.

Sockness has led Chris to believe that in a past life, he was a princess of Kidasuna named Princess Fehuni Hitikari.

Jakoba is the god of war of death of Kidasuna.

Sockness often claims to be a key player in unlocking the Dimensional Merge for Chris and that Michiro and Jakoba advise him on crafting rituals for it, also claiming that Jakoba was preventing the Merge unless Sockness and Chris were to meet, all of which Chris readily believed[2].

Sockness often gets drunk and goes online to express sexual and violent desires for Chris. He is also obsessed with demonic rituals. To maintain Chris's trust in him despite these unsavory characteristics, Sockness exploited Chris's beliefs in spirit possession and claimed to have been possessed by Michiro or Jakoba during such outbursts[1].

Supplanted by the Watchmen 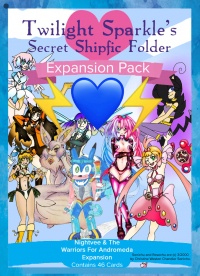 Cover art for NightVee and the Warrior of Andromeda TSSSF card pack.

Sockness was eventually ousted after getting in a showdown with the Watchmen group, who sought to protect Chris from Sockness and began a role-play campaign of their own using Sockness's own lore to pull Chris to their side instead.

Chris summarized how he perceived the matter in a blurb for a TSSSF card pack[3]:

Upon being shut out from Chris, Sockness forbade him from selling TSSSF cards based on Kidasuna and its lore[4]. Chris initially agreed, but later went back on his word and made the cards anyway[3]