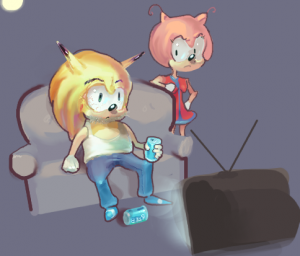 Ever since getting married to Rosechu, Sonichu finds that Reeb helps dull the pain.

Alcohol, much like shoving things up his ass, was something that Chris used to preach against, until he eventually tried it and discovered he loved the somewhat pleasant effect. 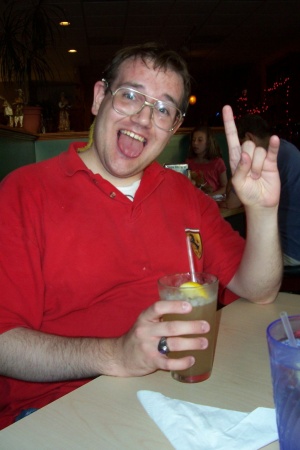 Finally Loosened up and flew to Long Island June 12, 2009. Keep It Responsible; ONLY One in a day, or 7 or less in all in a week. (Quote from CWCipedia)

Chris describes alcohol as a "slow-acting poison" in his FUTURE MESSAGE video. He also touches on the subject during Vivitheg's AIM chat, where in line 309, he mentions that he would not go to a singles bar because of it (and cigarettes). When asked about it in Mumble Chat 2, he stated that it "causes liver dysfunction and likely bar fights and automobile accidents".

Chris delivered a particularly effusive tirade in one of his e-mails to Reggie Fils-Aimé:

Despite this, a hypocritical video of Chris drinking a Long Island Iced Tea was uploaded to YouTube on 12 June 2009, perhaps showing us Chris will be willing to throw all his principles out the window when chances of being around a female arise.

Alcohol was mentioned briefly in a video shortly after, titled I'm Sorry, Dude. In this video, Chris makes an offer to treat Logan to drinks; as opposed to his past offers of "coffee or soda" to those whom he wanted to get to know. Alcohol was briefly revisited again on camera in Chris's Big Night Out II, where Chris was seen drinking. Chris's first recorded video where he appeared visibly intoxicated was Bless the Fans, Curse the Trolls. Alcohol began a slow and steady progression into Chris's life; this was made obvious in an email to Regina, where he said "I've also tasted Mike's Hard Lemonade, Budwiser, Miller, Micolobe [Michelob], Samual Adams and a couple of others. And I look forward to sampling more varities of liqour."

Budweiser is apparently his brand of choice, based on eyewitness reports from Fridays After Five and his account of a trip to a bar prior to visiting the GAMe PLACe on 6 June 2010. Meanwhile, a video from mid-October 2010 showed Chris slugging Kahlúa straight from the bottle, although he didn't seem to enjoy it too much.

When a correspondent in Mailbag 6 challenged him regarding his shift in attitude, Chris replied, "I discourage underage drinking fully; I wanted to try it once for myself."

In Mailbag 16, from December 2009, he described his drinking habits in more detail: "I am more of a Social Drinker; I generally do NOT spend a weekly amount on drinks; I only drink at like a party or with a friend on rare ocassions [sic]." This remark was met with some skepticism from trolls, since Chris has no friends, much less any who would invite him to parties.

Even after discarding his original hard-line attitude, though, Chris still found opportunities to get a little preachy regarding the demon liquor. In Mailbag 33, from early January 2010, he remarked, "And Alcohol; in Responsible, Moderate amounts, it can be good for you, yet I do not support Too Much of it, as if left unchecked, unresponsible or unassisted, too much can lead to fights that can lead to a trip to the hospital and automobile accidents." He also, in Mailbag 5, advanced the bizarre theory that drinking while pregnant "CAN PROVOKE homosexuality in the child."

In 6 June 2010, Chris revealed that he had been drinking at a bar before driving to the The GAMe PLACe and getting into a confrontation with a manajerk.

Alcohol may be contributing to Chris' declining health. Since his decision to leave the Internet and instead seek real life interaction, Chris has revealed to us that he spent most of his day sitting in bars and playing on his Nintendo DSi. While he once claimed to be a "Social Drinker", it is becoming quite obvious that he is anything but. Christian's childlike perception of the world is most likely deafening his awareness to the substance's advancement of relevancy in his life. At this point, he may be turning to alcohol for escapism. "I went over to a bar, and I had a Bud. A bottle of Bud. And I p- and then I played some solitaire on my DS, while I- while I waited to the- uh, while I waited to the hour."

It is obvious that with Chris's current loneliness and depression, his alcohol use may yield repercussions in his life - and it did. In July 2016, Chris, while thought to have been drunk and depressed over lack of progress on his gender transition, sliced open his taint with a knife to simulate the opening of a vagina.

Alcohol made another appearance in the Cherokean Chant performance, in which Chris states he had five swigs of vodka.

It is interesting to note that Cole Smithey mentions that Bob and Barbara Chandler met at a bar and acted like a couple of drunken losers.

Chris's family line has a history with alcohol. Chris's maternal great-grandfather, Robert Pettis Wynn, "drank heavily and had a girlfriend during the time he was married. Family stories say he failed to provide even the most basic support for his wife and children ...there are others who say he was a moonshiner."[1] 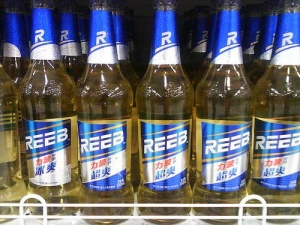 The official drink of Kick the Autistic. 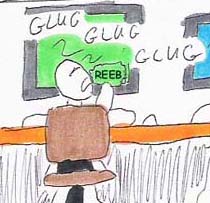 A worker at 4-cent_garbage.com downing a relaxing can of Reeb.

In Sonichu Chris refers to beer in all instances as "Reeb" which is just "Beer" spelled backwards. He probably thinks that this is very, very clever.

At first glance this seems odd, until you realize Chris still thinks Sonichu is targeted towards children (despite the graphic sex scene in issue 8, and frequent depictions of violent death), and so, he feels he must censor any mention of alcohol in the comic. This is a common theme in English-translated anime shows such as Dragon Ball Z and Pokémon, particularly those aimed at a younger audience.

Possessing or drinking alcohol was also one of the worst crimes to commit in CWCville, and could have led to a $1,500 fine or ten years in prison[2] (the fact that Chris thinks that ten years in prison and a $1,500 fine are interchangeable is indicative of his broader attitude towards money). It is also interesting to note that this punishment is much more lenient than the CWCville penalty for homosexuality.[3] And you thought Chris was intolerant.

Chris later said in his Rollin' and Trollin' video that the prohibition had since been repealed.

"Reeb" is the drink of choice for the drunkards working at 4-cent garbage.com. It should also be noted that there really is a drink called Reeb, it's a Chinese beer produced in Shanghai, though it's doubtful that Chris knew about it.