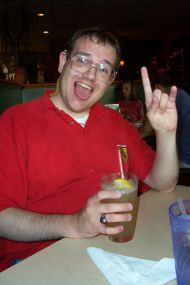 On 12 June 2009, Chris visited a local bar/restaurant, where he encountered Kim Wilson and another guy who recorded and uploaded clips of their time spent with Chris to YouTube. This event has been referred to as Chris's Big Night Out.

In the first video, Chris broke his 27-year period of abstaining from alcohol and had a sip (and then two tall glasses) of Long Island Iced Tea. Chris's choice isn't recommended for novice drinkers, because it contains vodka, triple sec, rum, tequila and gin (plus lemon juice, simple syrup and Coke), making it a rather strong cocktail to start off on. Chris probably chose it because he assumed, due to its name, that it was literally just iced tea. Note that, when he swallows the drink, he performs the same reaction as when he recycles his navy. 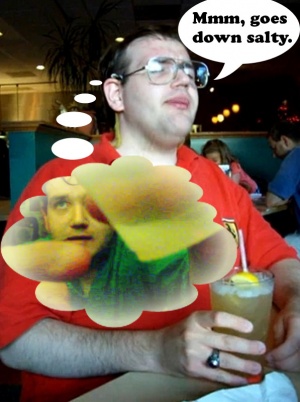 What was going through Chris's mind.

Kim: [with tejano music playing in background] So...so what do you have right now, Chris?

[The camera is turned sideways]

Guy: Say that one more time?

[Chris shuts his eyes and takes a tiny sip]

Kim: What do you think of it?

[Chris swallows the sip with some difficulty]

Guy: Rock on! All right!

In another notable video, Chris dances around and sings "I Love the Nightlife". While it's not surprising that Chris still thinks he can sing, it's shocking that he visited a club, since he's said before that he would never do such a thing.

It should come as no surprise to anyone--except perhaps Chris--that "I Love the Nightlife" is a song with a large gay following. Long-time trolls will notice that Chris made use of this same song during his CWC only accepts IN-PERSON FEMALE Encounters video. It should be noted that this song was also featured in several episodes of The Simpsons, like the Long Island Iced Tea he drank during the course of the evening, further proving that Chris has never had an original thought ever.

[Video starts in the quarter-middle of Chris's performance of "I Love the Nightlife", his voice sporadically cracking and his arms periodically flailing throughout]

Guy: [to Chris] Y'all catch a balloon fish?

Chris and His PSP

Chris: ...o the, of the winning videos of the PaRapper the Rapper contest when it came out on the PSP version of that game.

Guy: What about the err, explain, explain the omega one again.

[camera moves back to Chris's hand]

[camera moves back to Chris's face]

Chris: Yeah! It was fun. I completed it.

Chris: And especially, y’know, there's a fun part in the beginning, and, uh, you get to see two naked ladies, and...Kratos basically has sex with them, but it shoots off-screen—

Chris: --and then, like, it shakes all over the place! 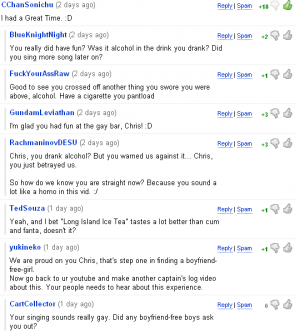 Kim Wilson accidentally revealed some personally identifying information to Chris, in the form of a license plate he saw and memorized.