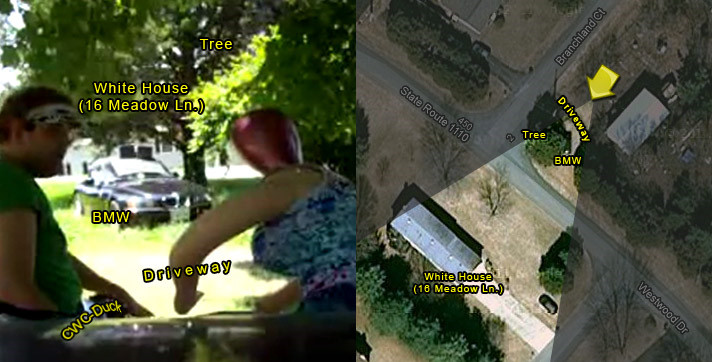 A view of where Chris and "Jackie" did the do.

Chris and Jackie's Date is a four-video series of a date between Chris (in full Tomgirl regalia) and Jackie, here represented by a sex doll, leaked on 24 February 2012. Their romantic date consists of dancing in Chris's room, a trip in Son-Chu to get some McDonald's, eating it and then making out with the doll in the McDonald's parking lot, and Chris's attempt at re-enacting a viral video in a dressing room at the Ruckersville Wal-Mart.[1]

The videos were originally leaked as one0612-hioghuyiogyo [SaveYouTube.com], two0612-vgiherqighbvpioerua [SaveYouTube.com], three0612-rqwehgiohcnracga [SaveYouTube.com] and four0612-hncu9tgohaeruxye [SaveYouTube.com], and data suggests that they were recorded on 11 July 2011. Throughout the videos, Chris speaks in an even higher pitch than usual, and enunciates in a revoltingly saccharine, babyish manner. Whether this is standard procedure for tomgirls or some sort of cutesy way of speaking to "Jackie" is unclear.

Background was provided when some Jackie emails were leaked:

And now, Jackie-pie, I'm gonna go ahead and sweep you off your feet.

[Turns camera to sex doll] Even though right now, you're sitting down. [Sets camera up on a table and picks up "Jackie," swinging her around and making his own music of la's and da's, occasionally throwing in random phrases as lyrics.]

[He stops dancing and kisses the sex doll's lips (where his duck has inevitably been) and sets her down. He comes to turn the camera off.]

And after having picked you up Jackie and giving you a good dance and song, we are now heading out to the restaurant. We're gonna have some fun, you know, in the car-- and sitting on the car and eating our food. Yep. Yum yum. Very very good. Yum yum.

[Proceeds to spend the rest of the video making strange "wacka doo" noises.]

["Jackie" is sitting on the hood of Chris's car, which is parked on his lawn. Chris comes by and sits down, making the car shake noticeably.] Okay, so Jackie and I, we're here at the McDonald's parking lot... we are sitting on top our car, after-- and we just enjoyed some apple-dippers and a Happy Meal.

[Chris gropes the doll and moves it as a child would when making a toy speak and uses a shrill, high pitched voice while he pretends Jackie is talking.]

[As Jackie] It was really, really tasty, yes it was. And even better...my...my professor here...fed-fed me some of the apples...and I enjoyed that.

[As himself] Yes, it was very enjoyable. Very good... So Jackie-pie, what'cha wanna do now?

[As Jackie] I say we make out. And then see where it goes from there.

[Chris then proceeds to give "Jackie" a deep, open-mouthed kiss in the public parking lot of a McDonald's. He reaches past her and clicks an iPod or a radio. "California Gurls" plays. Chris then moves the doll so that he his legs are wrapped around it, its legs around him. He makes out with it for a few seconds before doing a strange, scissor-like sex act. He makes sex noises, switching between his voice and Jackie's. He kisses her again for a moment before returning to his strange humping. He then puts the doll on the hood of his car, turns the music off, and rushes to the camera.]

Can be viewed here.

[after 10 seconds, he turns the sex doll around into the doggy-style position before it goes off-camera, the blow-up doll going head first into his mold-coated bathtub.]

[Resumes shrill, sexual moans that sound like a whimpering dog while thrusting the doll's behind.]

[Moans some more. He pauses to reach over to something (water):]

Whoopie! [tosses water into the air as if "Jackie" climaxes & squirts everywhere.]