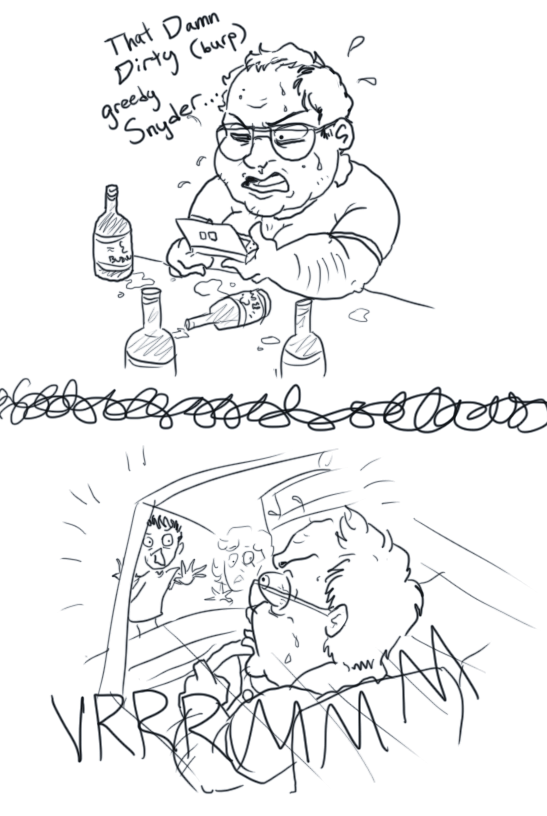 June062010.MOV is a video uploaded by Chris on 6 June 2010 in which he discusses a recent incident involving himself harassing Michael Snyder at the The GAMe PLACe while drunk. This is after mentioning less than a week ago that he was leaving the Internet for the fourth time.

On the evening of 4 June 2010, based on his own description, Chris was drinking alone at a bar in Charlottesville (after he had just attended Fridays After Five, presumably also alone) when he suddenly decided to go The GAMe PLACe and take pictures of Michael Snyder through the store window, leading to a confrontation with a manager. When several people came out of the store to confront him, Chris got back in his car and attempted to flee, nearly hitting Snyder twice as he attempted to block Chris's escape. Two police officers present at the shopping center stopped the fracas, listened to both sides, and then let Chris off with a warning after making him delete the pictures he'd taken.

Chris never told Bob and Barb about this incident, and they did not hear about it until the Matthew Noble call two months later.

During another debacle at the game place a little over a year later on 28 October 2011, Chris and Barb successfully hit Snyder with their car. That time, the Chandlers faced repercussions.

[sigh] June 6, 2010. At this, uh, moment, I, uh, have an understanding that there are misconceptions and rumors being spread about me, which, uh, I would like to state, very- right off, that rumors- spread rumors about anybody, especially to make them look terrible, is just not cool. But anyway, uh, first off, I would like to state, I do not, quote unquote, "piddle my cats." I r- I, the only parts I touch on them are their back and their heads. Nothing more.

[A long pause, where Chris seems about to speak several times.]

Anyway. After that, let me tell you about, uh, what happened, uh... [removes glasses] ...last Friday at the, uh, fourth of June. Hm. Okay, so it was after- Fridays After Five, I went over to a bar, and I had a Bud. A bottle of Bud. And I p- and then I played some solitaire on my DS, while I- while I waited to the- uh, while I waited to the hour. But then, about, about three-quarters of an hour through, because I had a camera in my possession right then, I had the impulse of, "Hey, I'll go over to th- I'll go over to the PLACe and take a picture of Michael Snyder so that I can print it out later and use it as a dartboard." So then- so that- that's just basically what happened. So then I drove over to the parking lot, of the PLACe, in front of Staples, and then I made my way to the window to take a picture of him, and nobody else. ...Right through the store window. Through the store window, just him. And that, uh, that, I was not alone there in front of the, uh, window, there was another dude who was apparently on his side and recognized me. He wanted to start a fight, but, in a fi- in a fight or flee, I decided to flee. So I went to my car, the man ran in and got Michael, and then Michael jumped in front of my car. He jumped in front of my car. He- as a matter of fact, he jumped on to the top of my hood! He was looming over my windshield!

It was horrifying. So I backed my car up. I backed my car up. And I- and I backed it up to my r- to my right. Then I see that there was, like, a couple of police cars in front of me, so that was like the wrong way to go, I should have backed up the other way. But anyway. So, to go around them... I went to another... aisle, and I drove through that. And then, so then I- then I decided to make a left turn. Bad, bad m- bad move right there. 'Cause he jumped in front of my car again, risking his own life! I could have been going top speed! He was lucky he didn't get hurt, as far as I know! Though I did not run him over. Jumped in front of my car, so I back up. And then I tried going around. And then this- and then this woman, I don't know who- I do not know who the blank she is, she jumps in front of my car, so I stop again. And then I started backing up, and then I get stuck from behind, and then I'm trapped. Between the, between police and Michael and whoever the hell this woman was. So then I sorted it out with the police, uh, they dele- they deleted the pictures, and, uh, and the wom- and then the woman... t- the woman came to me right up front and accused me of things, like, you know, see- seeing naked pictures on me on the internet, and then accused me of child pornography! I am not... a pornographer of any sort! And any naked pictures of me on the internet were either tricked from me by the trolls, or they s- deceived me, or I was blackmailed! And there were a number of blackmailings! As th- as they have sss- ratted themselves out, on the CWC- on their websites such as the CWCki or even the Encyclopedia Dramatica webpage. Anyway, the... through- and also, uh, Michael just basically loomed into me, and he said, he just basically shouted from me, "YOU'RE DEAD! YOU'RE DEAD!" Right, if I had the right mind, I would send, I would give him a charge of verbal, serve him a charge of verbal harassment! But I was already under trouble for quote-unquote trespassing.

[Another pause interspersed with attempts to speak.]

And then, so, with that I told the police about... I reminded them, eventually, of- of the trolls of the internet that have, uh, been going against me, and so I warned them of websites such as the CWCki. And I named a troll or two. I'm not gonna say, uh, who I named. But anyway, they let me go with a- anyway I was let go with a warning, out of the parking lot. The point- th- the point is, the only pictures I was taking were of Michael Snyder. Nobody else! No children. ...I want to make that very clear. And also, I do not want any more rumors spread at all! It's bad enough you have to have ruined- you had to messed up my once-good name, and have to transfer it to real life. Which may, which, uh, I basically got that impression first-hand for practically the first time, so proved that theory, and it made me feel sad, because I am not the villain! The trolls are the villains. Because they spread- 'cause they troll me. They make up the crap. They exaggerate and/or twist around my truths. My spoken word. And they give me wrongful mislabelings. I'm straight! And they use damn Photoshop! To make it look like otherwise.

Christian Weston Chandler, Ruckersville, Virginia, United States of America. I leave y'all with that, and I bid y'all... a good day or evening depending on the time zone.