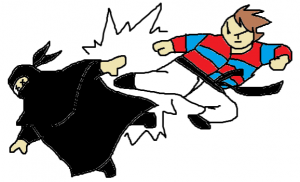 What Chris is imagining

"CWC Fighter" is a video from 18 August 2009 in which Chris shows us his (lack of) martial arts technique. Chris also gives us a legendary comparison between himself and the Street Fighter character Chun-Li, which is pretty generous.

[A camera is pointed at the back of Chris's blue stationwagon parked in the yard. A riding lawnmower is visible. Chris walks into the frame, dressed in a bright red T-shirt with an undersized denim vest and blue jeans. He also wears his Sonichu medallion. He stands, legs apart, hands clasped in front of him, eyes closed as if in prayer. He is possibly invoking some kind of ungodly power. He brings his hands to his sides, and with a crazed look he swings his right arm backwards. Aiming to either side of his body, he makes an upwards, poking motion with his left hand, then his right. His fingers are fully extended. He does the same thing, except straight ahead. He punches the air and twirls around, his back to the camera. He makes an awkward spinning kick and recovers ungracefully. He kicks at the air with his other leg, arms akimbo and head cocked to one side. He takes a step back and does two pitiful punching motions aimed at nowhere in particular. He attempts an uppercut and fails horribly at it, vaguely resembling a wounded animal. Chris punches some more air in random directions, but with much, much less force than when he started 20 seconds ago. Chris crouches down and does a very, very slow spinning kick where that looks particularly ineffectual. Chris returns to the camera, flashes a victory sign, and states:]

I've got a little Chun-Li, withiiiiin me!