Don't Mess With Me

Don't Mess With Me.MP4 is another video Chris made for trolls on 10 March 2010. Heightening the rhetoric against those who go against him from his previous video that day, he playacts what he thinks would happen if he actually met a troll.

Chris goes beyond tearing up a paper sign or beating his hammy fists against a cardboard box to indicate his anger towards a person and actually plays out a scene in which he pulls out a pocket knife and simulates the murder of an imaginary Clyde Cash, who probably had nothing to do with the loss of The Wallflower anyway. It's also worth noticing that Chris still seems to believe the ridiculous cover story about PandaHalo being real and getting raped by Clyde. When Chris pulls out his knife, it takes him about a total of 9 seconds to get it out. It doesn't take a knife expert to equip it in less than 3 seconds, showing that even if he tried to use the knife in a fight, he would have been beaten to the ground before getting a chance to take it out, let alone use it. Additionally, his lack of knife safety knowledge is unsurprising yet disturbing, as while in the heat of the moment as he pretends to slit Clyde's throat, he unwittingly swipes the blade of the knife within inches of his own throat, making it a miracle that this video wasn't his last. Of note is the point in which Chris uses "bigoted" as an insult when impersonating Clyde, implying he doesn't understand its descriptive nature. 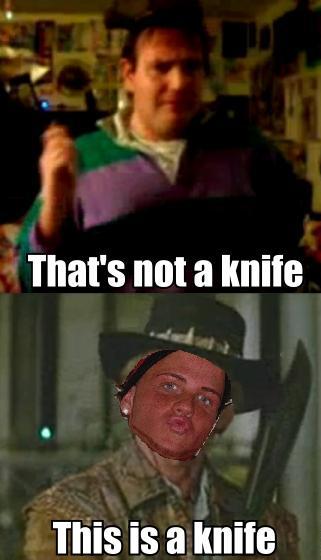 What would have inevitably happened if Chris pulled a knife on Clyde. 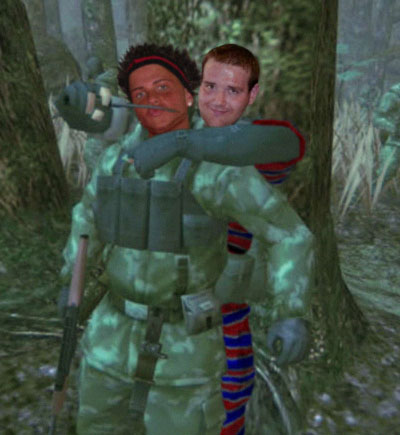 [stands to the right, imitating Fred Mertz] Why, hello Christian.

[returns to center, finger to his forehead] Uh, hello...

[to the right, crosses arms] What's the matter? You don't know me?

[to the right, brandishes the Claw] It's me, Clyde CASH.

[center] Oh. [crosses arms] What the hell do you want, you son of a bitch?

[right] OH, I just came by to tell you how much of a son of a bitch, lazy-ass, bigoted, fort treacherous rat you are.

[right] Oh, and how about that time I raped your sweet Australian panda bear?

[center] YOU SON OF A BITCH!

[Chris jumps at "Clyde Cash", starts punching the air in a girly manner. Punches himself twice, gets strangled, knees him, starts grappling with him. There's a jump cut as he continues to grapple. He punches, then starts stomping the ground. He is already visibly sweating.]

[reaches down and pulls up "Clyde"] Come on. Get up, you son of a bitch!

[puts "Clyde" in an invisible choke hold and takes an unreasonably long time to pull out a knife.]

This...this is for Sarah Cassandra McKenzie, you bastard.

[makes motions of slitting "Clyde's" throat, coming dangerously close to accidentally cutting his own arm then neck for real] SHHHHHHH!

[holds throat and struggles] Ughhh! Waaaagg! Ehhhh! [collapses, then stands back up, hands on hips. He picks up his knife and holds it up.]

Watch your back, trolls.