You know he's straight because his bra says so.

Fridays After Five is a large block party/concert series that takes place in Charlottesville, Virginia and Owensboro, Kentucky from spring until fall. In June 2010, Chris was recorded there, enjoying real life for once.

Chris first mentioned Fridays After Five in a video explaining his near hit-and-run on Michael Snyder. Based upon this knowledge, Chris has attended the event since at least 4 June 2010. Chris first alludes to his knowledge of Fridays After Five in the video "Rollin' and Trollin'", in which he stands outside the Charlottesville Pavilion and mentions how Christian and the Hedgehog Boys play there every Friday night. 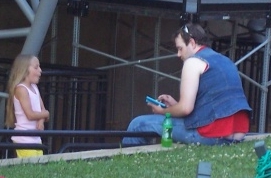 Chris trying to pick up a boyfriend-free girl.

Chris exhibiting elbow spasms attempting to dance. Note the man on the bottom-right shaking his head in disbelief.

On 18 June 2010, Chris went to one of these events and a good Samaritan (YouTube name 0ArchieBunker0) took these videos and pictures of him out in public.

According to the author, Chris wore a T-shirt that says "I Enjoy Vagina" and was wearing a "gay circular thing" on his hip which is most likely his PokéWalker. At some point, Chris pulled back his crude shirt to reveal his flabby gut and muscle bra, which he had apparently seen fit to write "WANT WOMAN!" on with permanent marker. Note the apparent, inexplicable (knowing Chris) absence of the Medallion of Fail - although it could have been removed just temporarily in order to simplify the (probably planned) act of pulling back the shirt.

Chris's clothing indicates he is looking to put a new twist on his old tricks. Like the attraction sign, Chris is shown making a point to display the writing on his clothing, declaring that he "enjoys vagina" and "wants woman." This is yet another example that this autistic man-child does not learn from the mistakes of his past. Also, the videos filmed at this event mostly showed the back of Chris's head, which shows a small but emerging bald spot.

Besides exposing his covered bosom to potential sweethearts - mostly severely underage - Chris spent his time at the event drawing Flipnotes on his Nintendo DSi, and trying to dance with his famous Autistic Chicken Dance - with all the grace and skill of CWC Fighter.

It is unlikely that Chris was aware of being photographed, which proves that all these actions are Chris's idea of being normal. When Chris eventually realized (or it seemed so) he was being observed, he suddenly disappeared like Batman. 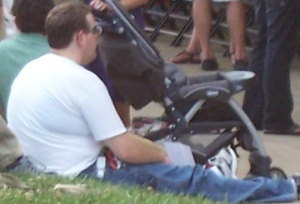 Tell me why I'm stuck in a sad lonely cage...

On 9 July, the troll who spotted Chris on Independence Day spotted him again. According to the troll, Chris had unscrewed the zoom lens from his DSi and was using it as a rudimentary telescope by pressing it up to his eye.

This time, the troll managed to take a picture of Chris, who appears to be wearing three Pokéwalkers of Fail. Two are red and white, and a custom painted one is barely visible underneath his arm. He also has what looks like a small bottle of hand sanitizer tucked into his belt. Chris has been known to immediately follow up any handshake with using hand sanitizer on himself. Chris is also holding a small piece of paper between his legs in both photographs, proving even further that he hasn't learned a single thing in the past seven years.

Chris's response to this sighting, delusional as always:[1]

Note how he says he's going to have the troll arrested for taking photographs, while in the same sentence noting how he had been taking pictures himself the whole time. 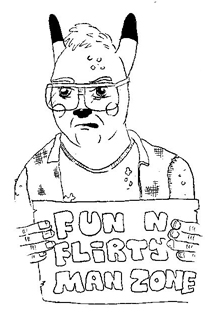 On 16 July, a different troll managed to spot Chris at the park. While no photos were taken, the description given paints a very...unusual picture.

While the initial footage from June introduced the "WANT WOMAN!" bra as a sort of makeshift attraction sign, the most recent sighting reports a full-fledged return of an actual attraction sign, albeit a very basic one.

The hula hoop is more puzzling. It's entirely possible that Chris brought it to add to the dance moves seen on this very page, but given Chris's abysmally low stamina, corpulent physique, and total lack of coordination or dancing ability, this seems like a very unusual choice. Another theory is that he used it to mark the boundaries of his "Friendly and Flirty Man Zone". He can be seen at the end of one of the videos "dancing", apparently looking at and drifting towards a girl using two hula hoops near the stage; whether this inspired him to bring one himself or not is a matter of speculation.

As of September 2015, no further sightings of Chris at the event have been reported, and it is likely that Chris no longer goes there in fear of being recorded again. He now spends his time at Cville Pride, Impulse Gay Social Club and OmegaCon.