Ultimate Guide to Sex and Disability

The Ultimate Guide to Sex and Disability is an educational book by Miriam Kaufman, first published in 2007. It states that it's the first complete sex guide for people who live with disabilities, pain, illness, or chronic conditions. Useful for absolutely everyone, regardless of age, gender, or sexual orientation, the book addresses a wide range of disabilities -- from chronic fatigue, back pain, and asthma to spinal cord injury, hearing and visual impairment, multiple sclerosis, and more.

Chris's first known mention of this book was on 5 July 2021 in a conversation between him and Null (which was leaked on 31 July), where Chris stated:[2]

He also provided a picture of the book in his lap.[2]

At time of writing, Christorians are unaware of how Chris was made aware of this book.

A few Christorians have taken it upon themselves to obtain this cursed piece of literature to see exactly how its contents could influence Chris (e.g. passages taken out of context). The book overall is graphic in its language and its description of the multiple facets of sex in general. As stated elsewhere its written from a perspective of someone who has a physical disability who may find sex to be awkward or unenjoyable. It is not intended as a guide on HOW to have sex with people with disabilities.

"Never attribute to malice that which can be adequately explained by stupidity."

There are a few choice passages in the book that when taken out of context, and with the reader failing to grasp on basic reading comprehension skills, could explain why Chris thought what he was doing was 'okay' and 'normal'.

Considering how Chris views himself as "disabled", he would naturally feel that what he is doing is okay because he has been excluded from "life and normal life experiences" and "there's at least one somebody for everyone". Therefore in his mind the book is justifying his decision and giving him a sense of entitlement that he deserves this.

Chris would take this passage as the green light that justifies his sexual attraction to his mother. If there are no restrictions according to this book, why can't he have sex with his mother? However, the intention of the quote is reassure the disabled reader that his/her feelings towards someone are okay and justified, not that it's okay to have sexual relationships with persons that most cultures/societies would deem as abhorrent and at very least illegal.

In the context of the book as a whole, this line boils down to "don't kink shame". Everyone has their own tastes and preferences, and nobody is in a position to judge. Except when it's having sex with your own mother.

This passage aged like milk, considering it aims to break the taboo of having sex with someone much older than you, and Chris initially led on about his sexual partner being "of this half of our universe", physically older than him, and worked "thoroughly and compassionately with her beforehand."

"On the 3rd day he rose again"

This quote could have been why Chris was so rigid with doing the deed every 3 days like clockwork.

In the pursuit of Christory, a number of Christorians obtained a copy of this book and subjected their eyeballs to the horrid content therein. Below are their opinions on topics on the book as a whole. 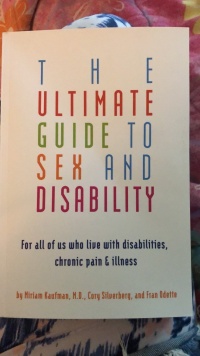 Chris's copy of the book

Seeing the book as a "valuable and informative" resource to help guide him with his incestuous relationship with Barb, Chris seems to have misinterpreted many of the things said in it.

As a result the book itself assumes the reader can already grasp what is considered sexually taboo and what is legal, as it does not appear to touch upon such topics in depth. This evidently makes it a terrible choice for Chris, whose problems relationship and sex-wise coupled with absolutely poor decision-making and reading comprehension skills go beyond the scope of this book.

Chris seems to have believed himself to be in a position to mentor people with relationship problems after reading this book. This is most notable with him attempting to provide guidance to the Suitress on her finding her "long-term" sweetheart in the college she'd attend. Having newly found power in finding justification to do unspeakable acts, he felt himself to be an expert in all things regarding sex and relationships.