Chris explains his "phobia". Note the text box in the screenshot. 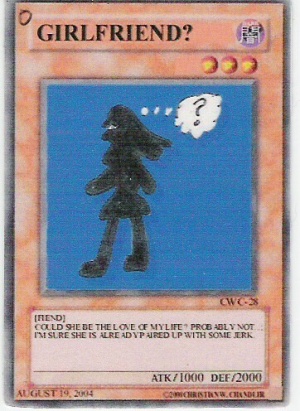 "I'm sure she is already paired up with some jerk."

Noviophobia is a word Chris created that he describes as his general fear of girls being paired up. While normal people would suggest that this is a form of social anxiety or that Chris is just love shy, Chris of course felt the need to coin his own term for it.

Chris's noviophobia manifested itself during the first months of his Love Quest, and came to be because the girls he asked would often turn him down on the grounds that they "already had a boyfriend," due to the Infinitely-High Boyfriend-Factor. This eventually led to Chris's obsession with finding a boyfriend-free girl. In a moment of typical egotism, Chris decided his envy and resentment of men with girlfriends was a legitimate phobia, and so formed the word noviophobia by using the Spanish word novio, meaning "boyfriend", and the English term phobia, derived from the Greek word φόβος (phóbos), meaning fear. Chris uses this word often and simply assumes others will understand what it is without any explanation.

Noviophobia as a name has several problems. First and foremost, Chris uses it to describe jealous feelings towards men in relationships - something which in no way resembles a phobia, which is an irrational fear or hatred. It also simply refers to boyfriends in abstraction, which isn't an accurate summation of Chris's issue with women who are in relationships. Finally, the word itself is a linguistic abomination; the prefixes for -phobia should be Ancient Greek in origin unless the word does not exist in Greek and cannot be Hellenicised (in which case, an irregular word is formed using a Latin or English prefix, but still not a Spanish one). A more accurate term for Chris's illegitimate phobia would be herastophobia, as ἐραστής (herastés) is the Ancient Greek word for a male, dominant lover; although as addressed he possesses no actual phobia at all.

The word has been alternatively spelt as "noiophobia", as it appears in Christian's letter to Nintendo Power about how Sprung has helped this condition. Chris later explained that this was an accidental misspelling.

In addition to the infamous Nintendo Power letter, Chris has used this particular invented term on several occasions.