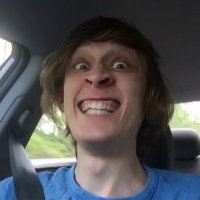 Randy Stair, also known as his Ghostsona Andrew Blaze (17 September 1992 – 8 June 2017), was a YouTuber who eventually became a mass shooter. Much like Chris, Randy believed in the existence of fictional characters and an alternate reality in which he was worshipped as a God, only his interests in OCs were tied to the animated television series Danny Phantom. Randy's escapist fantasies, however, were more unsettling in nature than just hoping to find a boyfriend-free girl: instead of seeing himself as a role model and a hero to his hometown, Randy's fictional counterpart and fantasy world involved his OCs – known as Ember's Ghost Squad – going on killing sprees with him after he took interest in the Columbine massacre. Eventually, Randy would act out his violent fantasies in real life and shot and killed three people at the supermarket that he worked at before committing suicide.[1]

In November 2020, Chris became interested in Randy's story after learning about him from a documentary on YouTube by The WCT,[1] possibly relating to Randy due to having a hatred towards men and becoming aware of his desire to live as a woman (he once mentioned that he felt his real name was "Rachel" after one of his OCs, although he never made an effort to transition due to his belief that he would become a ghost girl upon death). Chris mentioned Randy's Andrew persona by name a day after recording a video talking about him[2], and later brought him up on other occasions. Chris spoke about Randy in a positive light, most likely because Randy's own delusions about fictional characters being real in another dimension validated his own continued dissociation with reality, and subsequently downplayed the nature of his crimes, noting that Stair "made [his] mark" by killing three people before dying.

While talking with The WCT, Chris explained that he viewed Randy as a guardian figure, a notion which WCT played along with. When The WCT informed Chris of Jacob Sockness's plot to attend Everfree Northwest and meet Chris, Chris turned to role-playing a fantasy scenario on stopping Sockness. Chris claimed that "Randy and the Ghost Squad are working to break through the horde of demons around [Sockness]'s apartment building" and that The WCT could assist them spiritually. When Chris, upset about the My Little Pony Generation 5 reboot, role-played about a battle between angels and demons over the children's cartoon being produced, The WCT claimed to have communicated with Randy and that Randy also has a disdain for the rebooted My Little Pony.[3]

A leaked audio recording from 6 November 2020, originally titled Myrec_20-11-06_at_13:52:19.m4a, which Chris sent to The WCT (referred to here as 'Neko' and 'WildCat'), involves Chris "channeling" the spirit of Randy Stair possessing his Ghostsona, the transgender Andrew Blaze. Chris explained that he channeled Randy because "Andrew and her ghost squadron are able to help and do their part in the events of the Dimension Merge, especially now that I was able to help her get a post-death message out."[1]

Chris doesn't bother changing his voice while imitating Randy, nor does he use any of Randy's terminology while being "possessed".[note 1] He seems to make the excuse that the possession is why he just still sounds like Chris, claiming: "When you possess somebody else's body, you gotta work within their vocabulary and their limitations, and whatever."

"Randy", in true Chris-Chan fashion, blames his decision to commit a massacre on "mental handicaps" – though the real Randy did not have a significant history with disabilities or mental illness prior to his downward spiral and violent end – before immediately justifying the murders as his attempt to recruit new members for Ember's Ghost Squad before meeting them in the next world. "Randy" then explains that, after he killed himself and wound up in Limbo, Ember escorted him into the "Dead World" before he ran into several celebrities and Beetlejuice.

After a certain point, he rambles about the Merge in a very Chris-like fashion. He points out that, due to the Dimensional Merge, the souls of those that recently died would instead merge with their OCs instead of joining the ranks of the dead, and mentioned that like Chris, he also knew of Dimension C-197 and apparently had psychic visions before merging with his Andrew Blaze counterpart in the afterlife, going against the lore he had immediately set up moments earlier. "Randy" explained that ghosts were helping Chris's Godsona at the Temple in preparation for what was to come.

"Randy" then reminisces about older videos and laughs maniacally, then praises The WCT for chronicling his life and leaving things back in "Sonichu's" hands.

Chris (as Sonichu): Hey, Neko, it's Sonichu here. I'm doing this audio recording for you because... I got a valuable friend here who has a very important message for you. She came all the way from the... netherworld, the... pretty much the ghost world.

She's been- she just- she just watched all your videos about her. You know. And she just appreciates you very much on having been a fan and understanding what she was going through... and just... and she really appreciates you going on about her EGS series as well. So. Anyway. She's in this body with me, so I'm gonna let her speak now. This is Randy Stair... Andrew Blaze.

[There is a long silence.]

Chris (as Randy): Yo, WildCat. So rad. I'm in the body of Chris Chan here. I mean, this is not as cool as rocking with Ember every single time, but you know, whatevs. But hey, I've been living... three years gone from this world. You would say that that's just too long for anyone, right? I know. But at least you got the message I was going for. I mean, shoot, people been getting injured or dying around me all my life. So, how else was I to react with my... mental handicaps and everything?

But, yeah I came out totally woman and everything. I mean, yeah, the transition was definitely genuine with me. I just didn't go for the bottom. I mean, didn't have enough time to do that anyway, all things considered. (Stress sigh)

But yeah, message what- message from that... mass suicide, murder thing I did that time was essentially just, you know me recruiting for my EGS - for my ghost squad. I mean, Ember was already in with me and I needed it, and I was in, so...

Also, my other guys, might flog [?] The way up- I managed to get in a year later. Not everything got chronicled as well within my series, but my time on Earth was limited. I'll tell ya what, moving on to the... ghost realm as I did... I mean, it was quite a thing. I mean, shoot... kill myself, and... I went into limbo, and I didn't last long in limbo, because Ember found me there and she brought me to... the dead world, y'know.

I haven't met so many celebrities, and y'know, they saw the creepy guys and whatnot, even Beetlejuice. Quite a decent bunch of creeps and ghouls and other individuals who just... We're stuck in this pr- this is essentially limbo, I mean, if we're not reborn into another body or whatever, this is where we end up. Pretty righteous.

Oh, but yes, particularly ending up in someone else's bodies. [Long pause. Chris makes a strange sniffing sound.] Pardon me. But yeah, everybody who's been dying within the past few months or so has definitely been ending up in their respective counterpart's bodies in the opposite dimension. The Merge is happening, just as Chris Chan and Sonichu and Magi-Chan has- have been saying, and we- and we in the ghost world have been just witnessing all the ghostses not stopping into the limbo, just going into the other dimension.

And I have seen into... Dimension C-197 while I was alive as well, not just the dead world. Y'know. I mean, I had my share of righteous visions into other dimensions and whatnot. And that's borrowing from the dialogue that's in this brain! I mean, that's the thing: when you possess somebody else's body, you gotta work within their vocabulary and their limitations, and whatever.

But still, it's me. Randy's- Randy Stair. And you can tell by the way I'm talkin' here. I mean, I definitely found myself after I passed on, obviously. And I'm- I'm happy. I'm doing good. We're all good at the Ghost Squad here. Hey, I ended up making my own OC that ends up that was literally in existence in the Ghost Squad, and - Whoop! - There I am, in my counterpart's body. The ghost was my- The ghost was me! Andrew Bl- This was my OC! And I made it! I made it to Andrew Blaze's body. So, you could say I was definitely one of the earlier noted examples of somebody coming from 1218 into C-197. Or- Or in this case, the ghost dimension in between our two dimensions!

Which, that's just far out. Anyway. The Merge is gonna happen, and Chris Chan's powers and abilities are genuine. She's even got a whole bunch of other ghosts and spirits helping her out as well. It's real chill group around here at this temple- this house. You call this house a temple? Huh. Well, I guess it is true. This is- it's sort of temple-like.

But yeah. My brain was just all over the place when I was alive. But, I found my place where I am. And I made my mark with Ember's Ghost Squad. As much as I did. And all the other videos I did over the years. Oh, the squeaky voice video. Me singing Jingle Bells, and I was doing Fred. [Chris laughs in his normal voice, then switches to an extremely disturbing high-pitched laugh for a few seconds.]

Oh, that was so funny. [He chuckles.] Oh, but I do go on. And WildCat, thank you. Thank you so much for chronicling as much of my life as possible, with everything that I've talked about and I uploaded onto the internet. You rock, dude. You stay awesome. You're gonna be alive for a very, very long time, man. Alright.

[A very long pause. Chris can be heard sighing.]

Chris (as Sonichu): Mm. Oh. Well, she's definitely satisfied. [Chris laughs.] Well, there you go, Randy. Thank you for sharing your message, and WildCat and Neko - at least you got to listen to that. So, I mean, it's not necessarily an interview with Randy herself, but you might get to talk with her in person yet, but, that'll do for now, I suppose. Alright. Talk to you later, d- Neko. Thanks a lot.