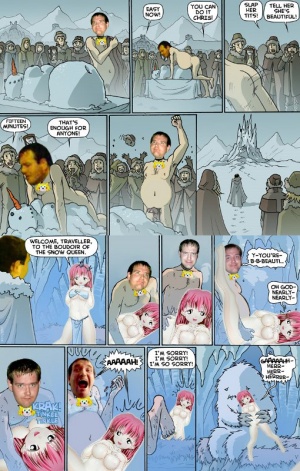 Cwcsicle is a name of a video log entailing Chris sticking his duck in the snow for 15 minutes. Trolls told him to make it as part of the Jackass 3D Prank Contest, in which the person who submitted the best prank would get to appear in Jackass 3D. Needless to say, Chris did not win, as he violated both the rules and common sense; most Jackass-style pranks are quite dangerous, so sending video footage (as opposed to plans or sketches) wasn't allowed.[2]

Chris also claims that it is impossible to change the onboard clock on one's cellphone; this is obviously untrue, but Chris may have had automatic update of date and time on his Motorola W315, and was too dim to know that it can be turned off. He may have feigned ignorance about this, in order to lie about the duration for which he performed this act of complete idiocy.

It is split into five parts: 100_2123 through 7.MOV. These titles seem to suggest that it was made in February 2010. Prior to the selling of the Autographed Photos, it would be his final work for a while to feature the medallion.

[Christian stands in his snow-covered backyard. He is dressed quite heavily, pointing the camera at himself with a rather shaky hand.] Hi, I'm Christian Chandler, uh, this is "Frozen Stalactite". [attempts to tilt camera towards crotch, thankfully missing it entirely.] I'm gonna put my dick in the snow [aims it back at his face] and I'm gonna leave it in there for about 15 minutes. Currently it's 12:38 [holds up his phone with his free hand] according to my cellphone clock. If there's one clock you can not change, it's the one on your cellphone. [pans camera down, revealing that he's buried himself waist-deep, then pans back up] Okay, see ya'll in 15 minutes.

[carrying on from where the former left off, albeit with a little more urgency] About 6 minutes in now. I've had previous experiences with, uh, freezing my dick, and I've even stretched it a bit. Right. I'll be checking back in se-in 7.

A-alrighty, it's 12:53 [nearly beans himself in the face with his PSEye lens] Let's pull me out. ENYGH! [gets up and nearly loses balance. The camera goes out of focus, although Chris can be heard shivering. It then turns to focus on his crotch, with his pickle thankfully quite out of view. The sound of something scraping the mic can be heard as he examines his genitals.] Feels blue. [we go out of focus as we see Chris's duck. Not only is it within view, it has turned bright red and the camera is upside down. Shortly after, the camera turns away.] Look at all that snow all over me. There's the hole it was in. [we finally turn to Chris's face] Heh. Kids, that is definitely something--[video abruptly ends.]

Everybody, I dare say that is one stunt you should not try at home. Peace out. [We turn away and the camera is set down.]