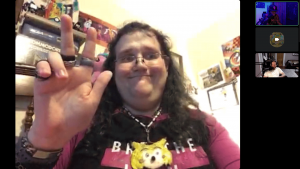 A frame from the uncut interview, as it ended.

The Create Unknown is a weekly podcast series hosted by Kevin Lieber of Vsauce2 fame and Matthew Tabor. Their premise is to interview notable online creators and gain insight on how they got started and what drives them.

On 28 October 2020, Chris (as Sonichu) was interviewed in their 64th episode. Initially behind a paywall, the interview was released for free a week later.

An "uncut" version of the interview was released unlisted nearly two months later on The Create Unknown channel, showcasing the interview with Chris on video over Discord. Most of the audio content is the same, save for an additional few minutes at the beginning and end of the video, before and after the recording took place.

An uncut version of the interview was released, unlisted, on The Create Unknown's channel on 16 December 2020, featuring video footage of hosts Kevin Lieber and Matthew Tabor conducting the interview with Chris on Discord. Some details originally unseen in the audio-only interview are on display here, such as Chris demonstrating his "telekinesis" and showing off his rings.

Given how different the minimal editing is to TCU's usual style, and the fact that they don't seem to normally record video for their podcasts, it's possible that this video was recorded and made by an unaffiliated Discord user watching the interview, and TCU simply chose to host it on their channel.

[An audio clip of Chris, speaking as Sonichu, with hosts Kevin Lieber and Matt Tabor, plays over the podcast intro]


Chris (As Sonichu): Our Christine-Chan ended up, uh, with the medallion, findin' it had been heavenly bes-bestowed upon her, nearly two decades ago- [Music]

Kevin Lieber: What is your average day like? Wha-wh-what's, what's a day in the life of Sonichu like? [Music]

Chris: This body is literally immortal. It's living for thousands of years! [Music]

Matthew Tabor: What happens to all of us, when the dimensions merge? Does anything change for us? [Music] He wanted to know how you deal with, with the hate, and not just, you know, blocking people, but how you deal with it mentally- [Music]

Kevin: I would love to hear your perspective on that original Sonic design that came out- [Music] Alright, so uh, we'll get you out on this last question, it's one we ask every single one of our guests, so here it is: Sonichu, what is your fursona? [Music ends]

Hey, welcome to The Create Unknown, I am Kevin Lieber. This is the home of make something, mean something, we are live on Discord with all of our great patrons, our two dollar tots, our dumpster crew, our infantry, our lustrious-illustrious baby gang, and uh, as always, I'm here with Matthew Tabor who will intro our guest.

Matt: We're really excited about this guest, uh, because we've tried for a couple months to get a hold of her, uh, and we finally have. Every civilization has its defining epic hero. Uh, those personas who enthrall us with... unique exploits and who traverse the singularly difficult problems of existence, and through whose struggles and triumphs we see a little bit of the best of ourselves. The Greeks had Achilles. The Greeks and the Romans had Aeneas. The Britons had King Arthur. Citizens of the internet have Mrs. Christine Weston Chandler.

Christine is the creator of Sonichu, a hybrid species of Electric Hedgehog Pokémon, inspired by Sonic the Hedgehog and Pikachu, that started as a simple comic and has, over the last 13 years of public consciousness, expanded into an entire, complex universe, and as we'll find out, even beyond, as Sonichu now exists in other dimensions.

Christine has been known online as CWC, Chris-Chan, and Christian, and her own evolution is so packed full of details that one YouTube creator has a perpetual documentary series, called "Chris-Chan: A Comprehensive History", consisting of 40 minute episodes. Just two weeks ago, episode 44 in that series was released. Christine may be the most tracked figure on the internet, and that has led to over a decade of doxing, trolling, and harassment on a nearly unfathomable scale. She's faced shocking adversity, including unfortunate incidents at a GameStop, identity theft, the death of her father, Bob, and her house (and nearly all possessions) being destroyed by fire. Yet, Christine has rebuilt, she continues to create, and she continues to evolve.

Matthew: I- I have a question about- so, Kevin asked about what your days were like- I have a question about something far in the future. Let's say it takes a while- um- it takes a while to- to make the swap. You know, you're waiting on this happening. What- what happens- because at- at some point- uhhhm. . . Mama's body will cease to exist- I mean, we all cease to exist at some point. What happens to Sonichu if that occurs- if it- hopefully it's- you know, a long, long, long, long time from now, but what would happen in that scenario?

Chris: Yeah, that's not happening. This body is literally immortal. It's living for THOUSANDS OF YEARS!

Matt: Okay, so there's no- there's no concern that something could go wrong like that, or- you know, you live a natural- normal- natural life and. . . uhh, it dies, we all do- that is just not a factor here.

Chris: Yeah, it's just not a factor here because-

Chris: I'm getting- because the portal is gonna ope- the portals are opening, they continue to open, everybody's coming through, going through to C-197 and to 1218 and back and forth and back and forth and everything. Everybody's gettin' to know it, the dimension merge is happening, the apex of it- and the- and the end of it is- the end of the dimension merge is going to happen and everything and- OOOH that's kinda interesting- and with the end- and uh, around that time, I'll get- I'll be back in C-197 with this body, doin' all that and then using our skills and magicians and whatnot- I go back in time from this pandemic, so that's. . . within the next- that's very soon, that's very soon. . . from now. I mean, Mama couldn't tell you the uh- the exact date of the dimension merge because it was above her head, so you give- so everybody- because people keep askin', "when's the dimension merge gonna happen? When's it gonna happen!? When's it gonna happen!? When's it gonna happen!?" She had to give you an immediate guess at that moment just done based on what she could tell from the [Speech impediment|cosmis enermy]]. I mean one time- I mean one timeline or another, they DID happen at that exact time of day obviously.

Chris: I mean, she- but- this is fact- I mean, shoot, You're talkin' to Sonichu, NOT CHRISTINE-

Chris: So, it's gonna happen! I gotta get this body to Mama and she and I are swappin' back. Obviously. That's-

Matt: Sounds good to me.

Chris: It just has to happen.

Kevin: Well, the question that- that I think everybody who's listening live- and by the way, thank you to all the Patrons who turned out for this. We actually filled up Discord- we're- we're dragging people in as spaces become available- uh, because we've hit the limit. It's amazing, and thank you all for coming in and supporting us, supporting Christine- er, uh, Sonichu, rather. Actually- you know what- supporting both Sonichu and and Mama, because we are talking about both today. So-

What Happens to the Rest of Humanity when the Merge is Complete? (34:32-