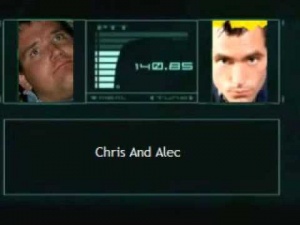 These conversations provide valuable background insight into the battle over Asperchu. Chris is forced to confront someone who, in a few important ways, is not unlike him. Just as Chris swiped Nintendo and Sega's characters to provide the building blocks of his comic, so did Alec (at least in Chris's eyes) use Chris's characters as the foundation of his stories, offering the same kind of excuses (though in a provocative manner) as Chris in the bargain. Likewise, Chris is confronted with the fact that he stole and abused Evan's character Simonchu, just as trolls have abused many of Chris's own characters, like Rosechu. He is also shown that, in the same way that those trolls have used the internet to mock, slander, and character-assassinate Chris himself, he has spread lies and slander about Alec in his comics and on the CWCipedia.

For some people, this would be an important opportunity for sober reflection. Chris, however, doesn't have the wiring for that. In the earlier conversations, he tends to be combative, seemingly believing that he can either mock or debate Alec into submission. Later, as Alec proves unwilling to tolerate Chris's bullshit — and the operators of the Asperpedia prove unwilling to take down their offensive ads from the CWCipedia — Chris becomes less and less engaged in their conversations, mechanically responding to Alec by rote.

Altogether, the calls show the amazing extent of Chris's inflexible belief that he is always right. (Faced with an uncomplicated set of requirements, he fails at the simple task of delivering a sincere apology on no fewer than three occasions.) It's interesting to consider what Chris thought the ultimate outcome of the dispute would be. He never seems to realize, despite many clear warnings, that he has no real control over the CWCipedia, and that his refusal to cooperate with Alec and Evan could result in its destruction.

There are also several parallels between these calls and the conversation between Chris and Matt Devoria. Discussions about what the word naïve truly means, Chris's inability to be an adult, and Chris's unwillingness to put honest effort into something he supposedly really cares about (in this case, his comic) prove that despite some emotional videos from that debacle, Chris didn't learn a single thing from his earlier experience.

Alec calls Chris to talk about the ads Mao has been putting on the CWCipedia, and to talk about the threatening videos Chris has been putting on YouTube. The two try to clear the air and start off making some progress, but they soon fall into some stumbling blocks about the usage of their respective characters. Alec keeps showing Chris that Chris is being two-faced about said usage, and pointing out that Chris is treating Alec in much the same way trolls treat Chris. Chris gets agitated and tries to change the subject several times, but each subject they move to further points out Chris's hypocrisy. Eventually a frustrated Chris says his phone's battery is running low and hastily disconnects.

After not answering the phone when he said he'd be available, a surprised Chris gets another call from Alec later in the day. Once again they discuss the ads on Chris's site, and Chris laments that his fans actually ask questions instead of e-fellating him. Chris says he thinks it's terrible that Alec emphasizes Asperchu's condition by having "asper" in his name, and suggests Asperchu wouldn't want people to know about it, even though Chris has spent his entire life mentioning his autism at every opportunity and using it as an excuse for his failures. Chris admits that he thinks his cartoon characters, their thoughts and feelings, and the world they inhabit are completely real, just like Toontown coexists with reality in the film Who Framed Roger Rabbit, and suggests that Alec is naïve for thinking otherwise. Alec then hammers Chris on his poor work ethic and lack of effort, and they have a discussion about hand-drawn comics versus computer-manipulated ones in which Alec argues that Chris shouldn't put down the digital manipulation in Asperchu since Chris uses Photoshop to add text to Sonichu. They also discuss Evan possibly suing Chris over Simonchu until Chris conveniently gets tired.

When Alec calls this time, Chris immediately tries to weasel out of speaking to him by claiming he's expecting a call. Alec takes Chris to task for not putting out a satisfactory apology video, for not giving in to Evan's demands regarding Simonchu and Simonla, and for calling Alec naïve and using the CWCipedia to slander him. Chris continues to whine that his fanmail challenges him, and he and Alec resume talking about the usage of their characters. Alec then tries to give Chris more advice about Chris's work ethic, but Chris makes more lame excuses, and quickly ends the conversation to wait for the aforementioned (and likely non-existent) phone call.

The audio for this call starts in the middle of the conversation, but it's clear that the normally diplomatic and well-mannered Alec is growing increasingly weary of Chris's shit. Alec wants Chris to make a better apology video in return for removing the ads from CWCipedia. Alec lists the conditions of the apology, and Chris tries to negotiate items that are non-negotiable. As Chris doesn't ever feel he's wrong about anything, Alec has to hand-hold Chris through the process of figuring out for what he should be apologizing. Chris also tries to go back on their agreements for the usage of their characters and wanting Alec to remove his version of the Chaotic Combo, though it was previously established that Alec's version is completely different from Chris's. Chris says that he'll have the new apology uploaded to YouTube later that night.

Alec is once again unsatisfied with Chris's apology, which leaves out several items Alec mandated. Alec tells Chris he's tired of Chris's bullying and now understands how right Mao has been in giving Chris a hard time. After deftly pointing out how Chris is nothing but a troll, Chris steps away from the phone and hides behind his mother's skirt by impersonating her and pretending she is calling Chris to take care of their cat; he then comes back to the phone to tell a furious Alec that he has to leave.

Alec goes through an even more deliberate process to step Chris through what's necessary to get the CWCipedia ads removed. Chris spends much of the call blowing Alec off and very strongly suggests that he's not going to budge on certain demands. For instance, he calls the demand to remove Simonchu from his comic "debatable" and at one point says he will not kill Simonla off, despite it being made clear that he must do these things to get the ads removed. There's a brief discussion where Chris says he didn't mean to insinuate that Alec kept women in his basement in cages to rape them, only that he was keeping them like pets. Scantily-clad abused pets. They discuss Chris's misunderstanding of words (such as "naïve") and figures of speech (Chris says if someone exclaimed figuratively, "just shoot me," he wouldn't necessarily shoot them). They talk further about Chris's update schedule, or lack thereof, and how easy it is for Chris's Sonichu Empire to get derailed. Chris tries to rationalize stealing the intellectual properties of others while complaining about Alec stealing from him. Chris firmly believes he will not be sued by Hasbro, Nintendo, or Sega if he tries to make money off Sonichu, and points to him not yet being sued as proof. Alec implores Chris to come up with something original before he gets sued, but his words surprisingly fall on deaf ears. Alec explains that he's ultimately trying to help Chris and it's very frustrating that he doesn't seem to care, and warns Chris that while he's been more than forgiving thus far, he has essentially run out of chances.

At this point, Evan has frozen the CWCipedia due to Chris's stubbornness regarding Simonla and Simonchu. Despite the unmistakable clarity of Alec's requests in the previous call, Chris still delivers an unsatisfactory apology leaving many items out. Chris complains that his computer has not been running right and now he can't get into CWCipedia to make updates or right the wrongs he never intended to right. Alec accuses Chris of not caring about Sonichu at all, citing his handling of the issue and inability to maintain a working computer. As he did with Kacey during the Father Call when he was accused of not caring about her and being unwilling to do right by her, Chris insists that's not true though he provides no evidence to counter the claims. When Alec shows Chris that he's putting far more effort into video games, sleeping, and attacking Alec than he does into his comic, Chris hangs up on him.

After being summoned for yet another call to discuss the presence of Sonichu Revolution on CWCipedia, Alec complains about Chris's failure to upload his comics and calls him out on his hypocrisy.

Alec calls up Chris a ninth time, this time to discuss his reasoning for the final pages of Sonichu 10, his understanding of copyright, and the importance of Christian Love Day.