This article is about the chat app. For the imaginary friend from My Little Pony, see Imaginary friends.
For the CWCki's Discord server, click here 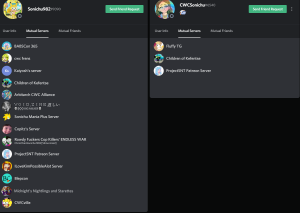 Some of the known Discord servers Chris was in, as of August 2020.

Discord is a chat messaging service Chris has used since at least 2018.

The Idea Guys used Discord to chat with Chris, role-playing as various fictional characters to him, who believed he was chatting directly with those characters. An unknown number of chats took place; after the Idea Guys were ousted, the Guard Dogs later leaked two such chats - The Bad Beginning and Cryzel Torture.

CWCville is a server by ViviChu which Chris joined in September 2018.[1]

Midnight's Nightlings and Starettes is Midnight Moonflower's Discord server for supporting her art and comics. Chris joined in July 2019.[2] The Watchmen raided Midnight's server and harassed its members over Chris's presence.

Ben Saint invited Chris to his Discord in September 2019.[3]

In January 2020, Chris paid to join ProjectSNT's Discord group, in an apparent attempt to get his foot in the door after she had given him the cold shoulder over Twitter in response to a tantrum he threw over her redesign of one of his characters.

The bulk of the chats center on Chris role-playing with the enablers feeding into his fantasies.

During the server's operation, people on Twitter commented on Chris's posts about it, revealing some troubling aspects of the server; not only were the admins and mods notoriously power-hungry and dictatorial, but in order to take part, users had to 'verify' their Discord accounts through a rather shady bot which requested access to user data, including any other servers the user was a member of.

The Official CWCki Server is a Discord server for the CWCki which was established in July 2020. Chris was briefly a member; he posted two messages before moderators opted to ban him for the purpose of maintaining distance between the server and Chris.

The Watchmen are a group of enablers who sought to protect Chris from malicious actors. Chris joined their Discord group. A large amount of chats from it were leaked by the Watchmen in summer 2020. Chris has also done a Q&A with a CWCki editor in the group.

Chris left the server due to infighting among the Watchmen.[4]

A group for the fanmade Sonic World game, which Chris joined in order to request Sonichu-themed mods. Chris was later kicked for stealing mods without permission.

A server created by Praetor for those who have purchased their limited-run $60 golden medallion. Chris was present in the server.

A Watchmen splinter server founded by The WCT, who took over as Watchmen leader following the infighting in The Place server. The server would only last for two months due to Chris being arrested for incest shortly afterwards.

Isabella Loretta Janke and her friends at Texas Tech used a Discord server which was allegedly for a university chess club to post a wide variety of disturbing material. The Chess Club was also at the center of Bella's attempted coverup related to the Incest Call. On the Discord, Bella boasted (without evidence) of having deep connections with the Kiwi Farms and with this Wiki.

Chris himself was not present in the Chess Club.

Bella had also created another chess server, Chess Group #15. Unlike most of her other servers, Bella notably uses much more friendlier language with her guests, and generally acts a lot more genial towards them. In other servers, she would often speak negatively about such guests while they aren't present. She invited Chris at one point for a brief visit, as well as the Suitress and The WCT.

The Suitress and a few of her friends had chatted about her discovering of Chris's affair with his mother here. The Suitress would then leak the clips of the incest call that Bella had given her here, to which two other members in the server, EllDudeRocks and Dr. Retard, would upload the clips onto Reddit and Youtube.

Chris himself was not present in the server.

To provide proof of his Discord account's legitimacy, Chris takes poorly-photographed selfies to post in the servers upon entering.

Chris has occasionally changed his name and avatar.