In a message to a complaining customer on Etsy, Chris claims he had torn ligaments in his knee as an excuse for why he failed to deliver a paid video request. Note that Chris was exaggerating, as he was able to walk fine in the Proposition to Sega video filmed two days later. 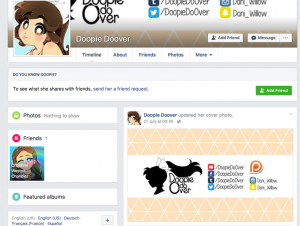 On 21 July 2017, a ween made a fake Doopie Facebook account in order to befriend Chris and get a rise out of him.

The ween revealed his actions and Chris's response on Kiwi Farms, under the username "TheDoopieTroll", and was promptly banned.

SonichuMerch, a troll, suggested to Chris selling his bath water[6].

Reported by Naught in the cwc frens server:

Transcription, sender's messages are in orange:

A fan texted Chris to ask about his fender bender to his car after photos surfaced of the damage.[8]