From CWCki
(Redirected from Doopie)
Jump to navigation Jump to search

"DoopieDoOver" or "Doopie" is the heiress of Megan Schroeder and The Wallflower. She is a voice actress/animator for the Planet Dolan YouTube channels. Like many artists on the internet, she also allowed customers to commission her to produce drawings and artwork for money. Chris appeared to consider her to be a gal pal, whereas she thought of him as simply another customer. In August 2017, she blocked him after receiving negative attention from weens and getting creeped out by Chris's messages towards her. 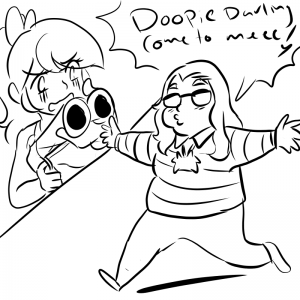 Chris discovered the Planet Dolan channel in August 2016 and took a liking to Doopie. He began frequently tweeting to her in 2017. His first message was on 7 March 2017 when she tweeted about her Borderline Personality Disorder and how it affects her social interactions. Chris, having completely missed the point of the entire post, and having judged so many people in the past, felt somewhat empathetic for Doopie, and made a misguided attempt to make her feel better by comparing her mental disorder with a bunch of online people she's never even met.[3]

Fully displaying his social awkwardness, Chris tweeted to her on the subjects of poop,[4] his hatred of online dating,[5] and even tried to flirt with her by quoting his "I’m Done Adulting" My Little Pony T-shirt.[6]

Doopie knew about Chris prior to his sudden obsession with her. She occasionally made fun of him on Lazycast — a podcast series she co-hosts[7] — as recently as March 2017.

Initially, Doopie ignored all of Chris's tweets; that is until on 11 April when she liked one that sympathized with her stance against animal cruelty.[8] This opened the door to her conversing directly with Chris; which she eventually did on 21 April when he asked about her newly dyed hair. A swarm of weens promptly descended on them, and Doopie found herself in the position of defending Chris.[9]

In July, she explained her opinion on Chris, mentioning that he had commissioned her for art and pledged to her Patreon.

He also paid her $25 for a separate commission to serve as a profile picture and liked it so much that he switched his profile icon on Facebook, YouTube, Twitter and Patreon to it. Ever since Doopie has first shared the picture with Chris, the drawing has been subject to many parodies defacing Chris in the picture, either by redrawing him as he actually appears IRL or by replacing Chris with another person such as Liquid Chris.

Chris began throwing that money at her in the midst of the Financhu Crisis, and he quickly resorted to begging people on Facebook for the exact amount of money, claiming that he needed it to help him and his mother.[15]

The request in question 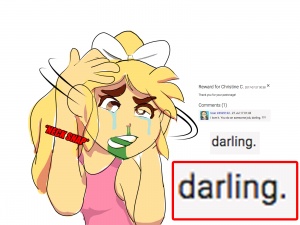 After becoming Doopie's customer, Chris began to refer to her as "darling" multiple times over Twitter and once on Doopie's Patreon.[2] He did it in spite of knowing that Doopie was not a boyfriend-free girl, which he learned on 16 May through a Planet Dolan video in which she talked about the success she had at online dating.[17]

Opinion is divided on why Chris did this. Some think he believed Doopie was an attainable target for his love quest, while others think that he was naïve to how creepy he sounded and thought "darling" was appropriate for a tomgirl to say in conversation. Chris has similarly used "dear" to address his mother,[18] seemingly oblivious to the incestuous implications. Given that Chris has had sex dreams about his mother[19] (and allegedly had sex with his mother), it might not bode well for his view of Doopie. Regardless this still inspired a ween or two to try out the already outmoded classic era trolling style.

On 1 August, 2017, Chris tagged Doopie in celebration of National Girlfriend Day, listing her among all of the gal-pals he's met on the internet and real life. The day is an occasion meant for female friends to celebrate their special bond.[21] Chris — in his typical, completely non-extrospective, fashion — failed to realize how sad and creepy it was to include Doopie, someone he knew only online via a client-artist relationship. If that wasn't inappropriate enough, Chris's subsequent tweets further unveiled an attraction toward Doopie — which appeared much stronger than previously expected. Doopie immediately protested, stating the obvious fact that she was a stranger to Chris. Despite this clear and unambiguous response, Chris happily disregarded it. Only partially agreeing with her, Chris went on to imply that he must have known her a little bit because he knew she was a good person. Chris then expressed his appreciation for her being in his circle of friends (again, ignoring her previous declaration to the contrary). Once again, Chris demonstrates his almost complete lack of social awareness.

However, despite his implied romantic attraction towards her, Doopie, having already known who Chris is, took it surprisingly well and only seemed to mention his heart on his sleeve in her next reply. Showing disgust towards Chris' skewed ideas of empathy, she began to scold Chris on his donation of his own money he could have used to support himself and Barb during the Financhu Crisis. She allowed Chris to claim a refund of his Patreon pledges, which he initially declined. 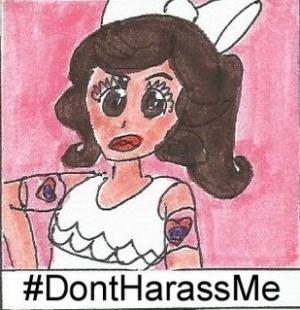 After everything was said and done, Chris unpromptedly uploaded a Captain's Log, ordering all the trolls to BACK THE FUCK OFF. He shifted all the blame to the weens, believing they were the reason Doopie blatantly rejected him. Chris attempted to begin two hashtag campaigns, #HarassCWCdirectly and #DontHarassMe. Comprised primarily of a tweet featuring Chris in the middle of a 3x3 grid surrounded by the cast of Planet Dolan, all wearing pink arm bands displaying a red heart with a purple eye in the middle. He did this to encourage the trolls to attack him instead; pledging to protect the entire cast of Planet Dolan. It's likely Chris did this simply to appear heroic to Doopie and to win over her heart again — despite that she never displayed any affection for him to begin with. 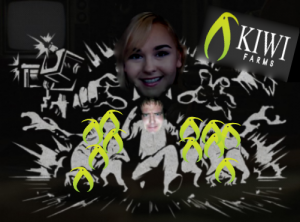 By 3 August, Chris' contact with Doopie had been severely reduced, due to her blocking him on Patreon and Twitter. When probed by a troll on 5 August, Chris gave this reply, suggesting that their relationship was not over yet:

He also discussed the matter on Patreon:

Since Chris failed to get the obvious, Doopie temporarily unblocked him on 5 August to spell out that she is not his friend:

Later, fed up with Chris's constant unwanted praise and affection, Doopie decided to leak all of the private e-mails Chris had sent to her by making an account on the Kiwi Farms. The users on the site then began to ask her questions regarding her interactions with Chris, to which Doopie responded with some intriguing answers. 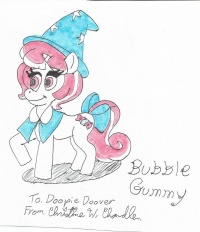 "An apology piece for you, dear."
Doopie as a pony, by Chris.

On 4 August, in response to Doopie blocking him over Twitter and asking him not to tweet about her again, Chris created a sockpuppet account to both follow Doopie and publicly defend his actions. On 7 August, Chris "allowed" his NightStar account to leak direct messages, held with his main CWCSonichu twitter account, in which he explained in further detail his motives and actions regarding Doopie, to a troll who then posted the messages to Kiwi Farms. It's possible that Chris did this in order for Doopie to see his side of the story, since he was aware she had joined the forum.

On 15 August, following Chris' attendance of BronyCon 2017, an optimistic Chris sent an "apology piece" artwork to Doopie via the sockpuppet. The artwork contained Doopie as a My Little Pony character named Bubble Gummy. Still reeling from recent events, Doopie scorned Chris' advances, and proceeded to block his second account:

On 3 September 2017, Chris began following LazyCast, a podcast which has Doopie and her boyfriend as members, on Patreon. He complimented the group, saying:[29]

On 13 September, Chris tweeted to a reply to Doopie by VimHomeless, attaching an image with text likely written by Jessica Quinn:

On 26 September, Chris temporarily broke up with Quinn for ambiguous reasons involving "lying"; after they got back together, he posted about how LazyCast #10 would be the last he watched of them.

The breakup occurred after Chris posted screencaps of several of Doopie's tweets, taken while he was using a sockpuppet account. These screencaps were accompanied by comments such as:[30]

This has demonstrated that he remains infatuated with Doopie, and the breakup with Quinn likely happened as a result of his dishonesty to her regarding stalking Doopie on Twitter.

On 6 October 2017, following a breakup with Quinn, Chris read a Kiwi Farms thread about it. Notably, he rated several of Doopie's forum posts there in the only ratings he had given on the forum at that point.[31] Afterwards, he began watching Doopie on YouTube again, and following her on Tumblr. 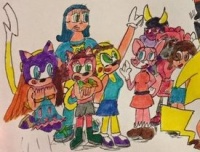 First artwork of Doopie (brunette to the right of Chris, drawn after Doopie changed her hair color).

She was slated to appear in a Sonichu and Planet Dolan crossover comic as she appeared on its cover, standing near Chris. The page was released on 29 May 2017, prior to Doopie blocking him from social media. Afterwards, the comic was scrapped in favor of Sonichu #12-9.