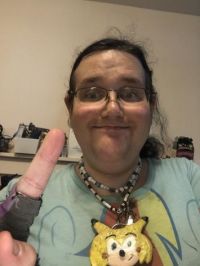 Chris's selfie, posted to verify himself to server member Duff101.

Midnight's Nightlings and Starettes is a Discord server by Midnight Moonflower, meant to support her art and comics.[1] Chris joined in July 2019. The Watchmen group also joined and harassed Midnight and other members over Chris's presence in the server.

Chris ChanSonichu1982 has joined. Stay a while and listen!

Is that The Sergeant at Arms?

[Chris linked to The Sergeant at Arms's YouTube channel]

Barbara's Trip to the ER

NOTE: Chris was not directly involved in this conversation.

The Watchmen raid Midnight's Discord server to harass and intimidate her and other members over Chris being a member of the server. Watchmen members Naught, MKR and AquaDiamond8; and Midnight's friend Lilli are present in the conversation.

Midnight protests against the treatment towards herself and her friends.

The Watchman XIII claims to be in an affair with a server member (identity redacted).

The member asks XIII and other Watchmen what is going on, insisting she is not cheating.