On 2 February 2021, Chris discussed in the Watchmen Discord server The Place about piezoelectric crystals and whether they could help him open an interdimensional portal. He posted a clickbait article on the matter as reference. Chris also uploaded messages between himself and an unknown person in which Chris concluded that a taser to the Gate Crystal and Celestial Key quartz crystals would unlock the portal and result in the Dimensional Merge.

The Watchmen expressed skepticism at this, to which Chris made flippant responses. 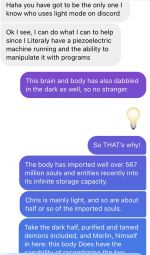 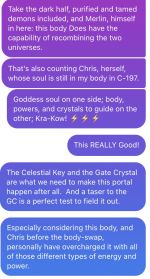