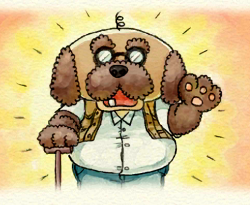 Was Chris the first to discover him? Not quite, but he almost was.

On 25 May 2019, YouTuber Nick Robinson conducted an interview with Chris over rumors that he was the first person who discovered Pappy Van Poodle, an obscure character in Rusty's Real Deal Baseball, thanks to documentation of the fact that he bought the game and an indication that he played it with specific conditions that may have let him see the character.

Ten days before the video, Nick uploaded a video on Pappy Van Poodle under the title "The Nintendo character with zero Google results", which prior to the video's release was thought to be just a rumor that spread across Miiverse.

In reality, Pappy is a hard-to-encounter character; he only appears if the player does not haggle (over real money) with Rusty, the titular character who runs the sport shop that sells them over the games needed to progress the story. When he does, he gives the items required during the haggling process to Rusty towards the end of game, along with one of Rusty's pups. Not long after uploading the video, Nick heard rumors from a YouTube comment that Chris might have been the first person who discovered Pappy, due to his spending habits.[1] Nick managed to get Chris's contacts from Copitz so he could personally confirm if the rumors were true.

In the end, Chris has never heard of the character, thus marking the rumor as false.

Nick: Are you familiar with that?

Chris: Yeah I played it.

Chris: And la... I remember playing da buncha minigames within that. And making a deal with Rusty!

[Chris takes a sip from a mug]

Nick: So, uh, th... there was aaa... I-I made a YouTube video recently about this hidden character in the game? Um-

Nick: It's, it turns out that... uh you remember like there was a haggling thing where you could negotiate with Rusty?

Chris: Oh yeaah. [Chris turns his head to his right]

Chris: He's like [unintelligible chuckling] "You're going making me lose my whole profit margins! You make me go below even breaking me even!"

Nick: So, I, somebody told me that you had played the game and that, when, when you had negotiated with Rusty, did you, did you haggle with him? You haggled the money down?

Nick: Oh, got it! Um, I'm trying to track down who originally... um, discovered this character for the first time and somebody in a Youtube comment said that you had encountered this character [Chris makes a weird face] or that you didn't negotiate but I guess that's not true.

Chris: Yeah not quite, sorry.

Nick: It's okay! What are your like main memories of Rusty's Real Deal Baseball?

Chris: The back and forth between me and the wabbit. Cuz Rusty was a wabbit.

Nick: I actually, you know, I-you might be thinking of Nintendo Badge Arcade? Cuz that was a rabbit. I think Rusty was actually a dog.

Nick: But, uh, just to be clear, you did, you did haggle with Rusty, and you did negotiate with him to get those prices down.

Nick: Got it. Um, thank you so much Christine it was a pleasure to meet you!