Joshua Martinez used her identity to troll Chris in April and May 2009. Chris, being the humble guy that he is, found it absolutely reasonable that a highly attractive and popular movie star was sexually interested in a fat manchild like him.

Since "Vanessa" told Chris she had written her own Wikipedia biography, Chris felt that he had a righteous claim to do so as well. On 5 June 2009, after failing at his attempt to write his own Wikipedia biography, Chris tried to get a section on his supposed relationship with Vanessa Hudgens added to her Wikipedia page. Using the now-banned username of Sonichusaysyeswecan, Chris stated that "Vanessa and I are very close friends, and we have been working together much as of late. I think that this should be mentioned in the article."[2] His request was ignored.

The Vanessa saga showcases Chris as his most naïve, with much real-life trolling by Joshua. As Ivy put it:[3]

Chris got in contact with his old friend Joshua Martinez from James Madison University to apologize for smearing him on Encyclopedia Dramatica, in order to get a part in a movie and make connections with celebrities. After a single email, Josh began to imitate Vanessa very poorly with disquieting success.

On 5 April 2009, Chris emailed Joshua to apologize for his reprehensible behavior in unnecessary detail , for the sole purpose of obtaining personal benefit.

After this email, Joshua would begin to imitate Vanessa Hudgens over a series of conversations, using his own screen name for all except one. 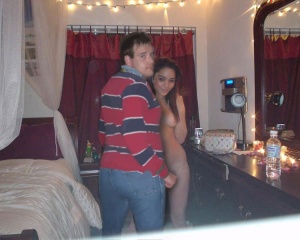 THIS IS WHAT CHRIS ACTUALLY BELIEVED.

These chats were procured by CWCkipedian Robotnik, as Josh had no problem in handing over chatlogs to whoever asked.

On 6 April 2009, Vanessa Hudgens borrows Joshua's AIM to talk with Chris. In this chat, Chris tried to get Vanessa to give him a part in a movie. Toward that end, she talks him into doing A CWC Audition. In this chat, Chris talks about God and Jesus telling him that Ivy is his true sweetheart, and appears to believe that the priority in having a sweetheart is to fix his biological clock, which has since broken.

Took place on 14 April 2009. Vanessa wastes little time in trying to seduce Chris. Chris remains faithful to Ivy for a few minutes before delving into disgusting cyber-hanky-panky, showcasing some disturbing sexual habits, including playing the female role, barking like a dog and shouting "SHAZAM!" during intercourse.

Took place on 19 April 2009. Chris continues to retcon reality and establish that he loves Vanessa only as a gal-pal. He spends the rest of the chat trying to arrange a meeting with her.

Took place on 20 April 2009. Chris and Vanessa continue to arrange their meeting, with Vanessa offering her ideas of what Chris should wear. Her intention seems to be to make him look like a moron.

Took place on 21 April 2009. Chris talks about his past indiscretions, discusses Ivy's influence on Sonichu, and describes his martial prowess.

Took place on 22 April 2009. Chris and Vanessa talk more about what he would do for Ivy. Their discussion mostly centers around the things he would shove up his rectum for her.

Took place on 27 April 2009. Chris actually believes that Vanessa came to meet him and talks about having to evade Snorlax to come and see her. He briefly talks about getting Clyde Cash locked up.

Took place on 30 April 2009. Joshua finally gets around to creating a separate screen name for Vanessa. Chris accepts that he might fuck two gay guys with Ivy if she asked. He also appears to confuse Megan Fox with Vanessa, in an incredible failure of facial and body recognition.

Eventually, Bob and Barb found out that Josh had used the Vanessa persona to con Chris into buying an overpriced PSP from him. Bob and Barb went to the police with the intent of capturing Josh. However, Rocky Shoemaker intervened and asked the police to investigate the trolls. Because of this, Ivy broke her ties with Chris. Additionally, Bob and Barb also found out that Chris had been stealing money from Barb. Because of this, Bob decided to take matters into his own hands and sue Josh in a small claims court. What happened afterwards is not known, however, it is clear that once Josh was found out, he went quiet, and has not interacted with Chris ever since. [3]