From CWCki
(Redirected from Guitar)
Jump to navigation Jump to search 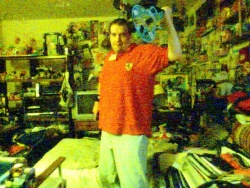 The gitar in the image that won him $400 from GameStop (Guitar Hero III version).

The Gitars also made many appearances in the comics, for example when going Jericho on 4-Cent Garbage, and also on the cover of his mocked-up copy of Christian Weston Chandler's Adult Chronicles. He appeared to think that it counted as an actual instrument and gave him the skill to really play a guitar.

Fun Fact: He failed at using the guitar strap.

After the 10 January 2014 house fire, it's currently unknown if the Gitars of Fail survived the blaze, but it's unlikely. 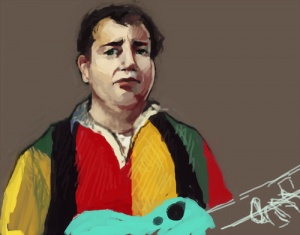 How Chris sees himself.

Chris made Bobby Kotick a very happy man. If the October 2010 room pictures were clear, Chris had at least 5 Gitars of Fail:

It's not clear why Chris would buy more than 1 controller, as the controllers were mostly compatible with newer games and he obviously has no friends to play with. Why he kept collecting more of them after Guitar Hero went on hiatus is anyone's guess. But then again, common sense has never had much to do with his video game purchasing decisions--or any of his purchasing decisions, really.

He may have had even more of them, as he sold another Guitar Hero III Les Paul on eBay in September 2009. He also had a customized Rock Band Stratocaster known as "Meatwad's Shredwud" appear in a video he recorded in October 2009. Chris hocked this guitar on eBay around the same time, effectively selling a product identical to another cartoonist's intellectual property. 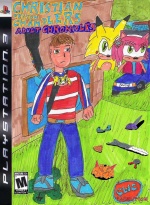