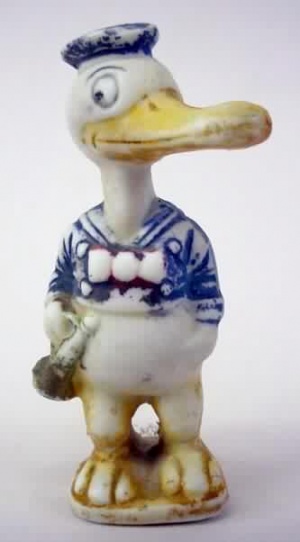 What Donald Duck would probably look like had Chris's impersonation manifested.

Chris likes to believe that he is good at impersonating Donald Duck. His impersonation has been judged as mediocre by most and downright creepy by others. This is mostly due to the fact that Chris does not use appropriate comedic timing to introduce his voice acting. Although unlikely, some trolls maintain that when he worked at Wendy's, he was actually fired for doing this impersonation. Since it might have been one of many grievances that Chris's former employers had, there might be some truth to this claim.

This impression is an achievement of which Chris is extremely proud. He even goes so far as to mention it in casual conversation, and suggests other people to use it when hitting on women. Apparently, in Chris's mind, chicks dig unsolicited impersonations of Disney characters. He has probably misunderstood the common practice of showing off one's talents as a means to attract attention; this might impress a ten-year-old (if, that is, they're not terrified by it), but will not entice china.

On 23 August 2011, Chris sang the song "Der Fuehrer's Face", from the famous Donald Duck short of the same name, in an attempt to mock Jack Thaddeus's communist views.[3] Chris, of course, thought Hitler was a communist.

Examples of the impersonation